“It’s restored to what it was before. Obviously, if there were trees that were larger trees, we’re working with the landowners, but that’s not going to be back at the same likeness right away. But that fully reverts back to them wanting to build then they can,” Grover said.

For 200-year-old trees, not right away means not in the lifetimes of your great-grandchildren.

“We’ll continue to bolster those, add information to those. We still have, in working with the landowners and the communities, some reroutes that we’re looking at, and obviously you kind of need to draw that line in the sand and turn in something, but we’re now moving forward with some of those other things to see what we can and can’t do,” Grover said.

Note the wording: “bolster”, “add information to those”, not actually answer any of the numerous questions submitted by landowners, EPA, state agencies, and a wide array of organizations.

Multiple counties along the pipeline’s route have passed either ordinances or recommendations that Sabal Trail add two feet to the minimal three feet of cover over their natural gas pipeline, making the cover five-feet deep.

On Monday, April 7, Brooks County Commission unanimously passed a resolution encouraging Sabal Trail to bury the pipeline with five feet of cover; the commissioners voted on this because of community concerns regarding farmland.

“It’s more important to be working with those individual landowners, instead of just saying five foot of cover across the board because in some places that doesn’t make a lot of sense. So it’s important to understand that we understand your concerns, and we’re addressing those on a property-to-property basis,” Grover said. “We’re going to address on a case-by-case basis. FERC is going to be lead agency, and they will provide the direction on how the construct-ability plays out.”

Grover didn’t mention that the Georgia Environmental Protection Department (GA-EPD) has to decide on an air quality permit for the Albany Compressor station, as Greenlaw and Ted Turner’s Nonami Plantation pointed out, and as Florida now knows is relevant to the compressor stations and FL-DEP, too. And Sabal Trail has applied for at least two water permits with FL-DEP. So FERC isn’t the only decider: state agencies are, too. And let’s not forget those Maine citizens who say Spectra lied to them, about 24/7 monitoring of a compressor station that leaked, the town of South Buffalo, NY that denied permission for a compressor station, the resolution passed by Chamblee, Georgia, opposing a methane pipeline, and the Pennsylvania Supreme Court ruling that local governments can restrict pipelines through zoning ordinances.

Sabal Trail hopes to get FERC’s Notice to Proceed during the first quarter of 2016; this would green light construction, which Sabal would like to begin during the second quarter of 2016, with possibly having the pipeline operational by May 2017.

“We anticipate that we’ll have customers in the State of Georgia. We don’t have any yet, but one of the things that we typically see … what they (town officials, co-op, local LDC) need to do is wait and let a project of this nature get some legs under it,” Gonzales said. “Wait until a little water has run under the bridge, and let the process go along, let permits get filed, and so forth.”

So STT admits it has no customers in the state of Georgia now. And that means, according to two lawyers so far, no Georgia eminent domain for Sabal Trail.

In the December 2013 presentation to the Lowndes County Commission, Sabal Trail claimed the pipeline will have substantial economic benefits. In Georgia alone, the project is expected to create 4,500 direct and indirect jobs.

Local contractors for what? Apparently not for installing the pipeline, since Spectra admitted in Gilchrist County, Florida that they’d already picked a contractor for that.

And what taxes? How much? STT provided no more real information about local benefits to the VDT than they did to the Lowndes County Commission.

Ms. Grover can’t seem to remember when her posse of seven Spectra specialists rode into Leesburg, GA, and rode back out with almost nothing they wanted. It was Thursday 10 July 2014. Ms. Grover is sitting on the far end of the front row of the picture below, and that’s her on WALB TV in the second picture below, just to jog her memory.

Sometime in mid-July, Sabal Trail Transmission went to court with a property owner in Lee County suing for trespassing. 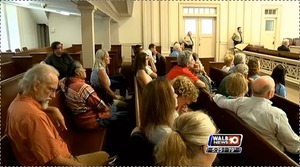 “We had the hearing that was in Lee County, a week or so ago.

And we’ve been hoping to get survey permission from landowners since early or mid last year, and had not been able to get survey permission. And so through the state laws, we pursued that through the courts in order to collect that information,” Grover said. “FERC wants us to have a complete application in order for us to know if we can or can’t build there, we need to have that data, and so that’s a part of the process then for us to enter the property. We actually settled that hearing and we would dispute the trespass claim. We have our records and our documentation and our witnesses that can confirm we did not enter that property.”

Ms. Grover admitted Spectra actually has to have complete survey data. So any landowners who don’t give permission really are delaying Spectra’s plans. Molon Labe: Come and Take It.

She didn’t mention Spectra got no judgment for eminent domain, got no consent order, and has to come back to south Georgia for a trespass jury trial.

The VDT asked one hard question and got no real answer:

The Times asked, “The Florida Natural Gas Association claims that Florida uses approximately 894 billion cubic feet of gas annually, once fully complete, this pipeline can transport over one billion cubic feet per day, does Sabal Trail and its partners have plans to export natural gas from the U.S. to foreign countries?”

Grover replied, “Our approval process with FERC has a need and necessity piece to it. If we cannot prove the need, and not just say we need it, we need to have that specific need with customers to show that in order for us to get any sort of approval. Our supplies are our domestic supplies for FPL (Florida Power & Light Company) and Duke Energy. Any sort of exporting of gas would have to go through an entirely different permitting process through the Department of Energy, and we’re not seeing any sort of permit with the Department of Energy. The energy commission with FERC is the certificate that we’re looking for.”

So Grover admitted STT hasn’t proven a need for the pipeline. And she didn’t mention that three companies have already gone through permitting at the DoE’s Office of Fossil Energy (FE) and received LNG export authorization, right at the end of the Transco -> Sabal Trail -> FSC fracked methane pipeline in Florida. She also didn’t mention that Spectra expects to export from Texas and Louisiana, Spectra is building one and maybe two pipelines through British Columbia to an export terminal, Spectra’s Algonquin and Maritimes pipelines conveniently lead to the proposed Goldboro, Nova Scotia LNG export terminal, and Williams Company of the Transco first link in the Transco -> Sabal Trail -> FSC chain wants to build the Constitution pipeline for LNG export through Cove Point, Maryland and Spectra’s BC pipeline also connect to Williams’ Washington Expansion Project (WEP) which runs down I-5 through Washington state to two LNG export terminals in Oregon.

Yet Ms. Grover doesn’t seem to think that Sabal Trail fracked methane would go to those three already-approved LNG export operations right where that pipeline chain aims on Florida’s Atlantic Coast. And let’s not forget Port Dolphin near Tampa on Florida’s Gulf coast, already approved by FERC for LNG import: what if Port Dolphin files for LNG export, like Elba Island, Georgia already has? And speaking of Elba Island, Sabal Trail fracked methane could easily connect through existing pipelines to get there. I guess that would be a Sabal Trail customer in Georgia.

But do you want your land taken for LNG export profit by companies in Houston, Texas and Juno Beach, Florida? Ms. Grover once again bragged about her rosy view of Spectra’s safety record. Look at Spectra’s actual record of corrosion, leaks, explosions, and PCB spills and at Spectra’s lack of insurance to cover such things: do you want your local and state taxes to have to pay for pipeline disasters?

“We hope that people are communicating their concerns so we can address them.” 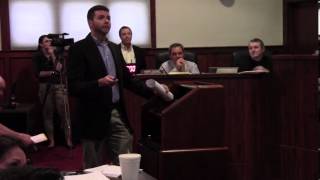 Here’s Ms. Grover and other Spectra reps dancing around questions for two hours in Gilchrist County, Florida. And once again here’s Ms. Grover’s posse of seven in Leesburg, GA, trying to convince a judge of the inevitability of their demands to get onto other people’s property and the judge not buying it. Looking forward to that trespass jury trial in south Georgia.

And maybe the VDT would like to do a followup with people who will actually answer the questions Ms. Grover did not.