Not just for Ted Turner, former Florida Governor and U.S. Senator Bob Graham, and Greenlaw anymore: now the whole neighborhood south of Albany is objecting to that fracked methane pipeline and its compressor station. Plus the hundred people who showed up at the FERC Scoping Meeting 4 March 2014, and more who went to U.S. Rep. Sanford Bishop’s (GA-02) listening session 17 April 2014. When Spectra’s Andrea Grover bragged in op-eds about the 50 public meetings, she forgot to mention that the public response was overwhelmingly against Spectra’s pipeline, and that opposition is growing.

The South Dougherty Community League will hold a meeting to over concerns for a compressor station on Newton Road….

In a press release from the South Dougherty Community League says, “In the case of the pipeline that is being designed to go through Albany and its surroundings, a large, powerful pumping station is being planned to be located near Albany’s airport and would pass through valuable quail hunting plantations and open up access to remote natural areas for trucks and poachers.”

The meeting is scheduled for Tuesday, August 12th at 6:30 p.m. at the Eureka Baptist Church located 1201 Lily Pond Road. 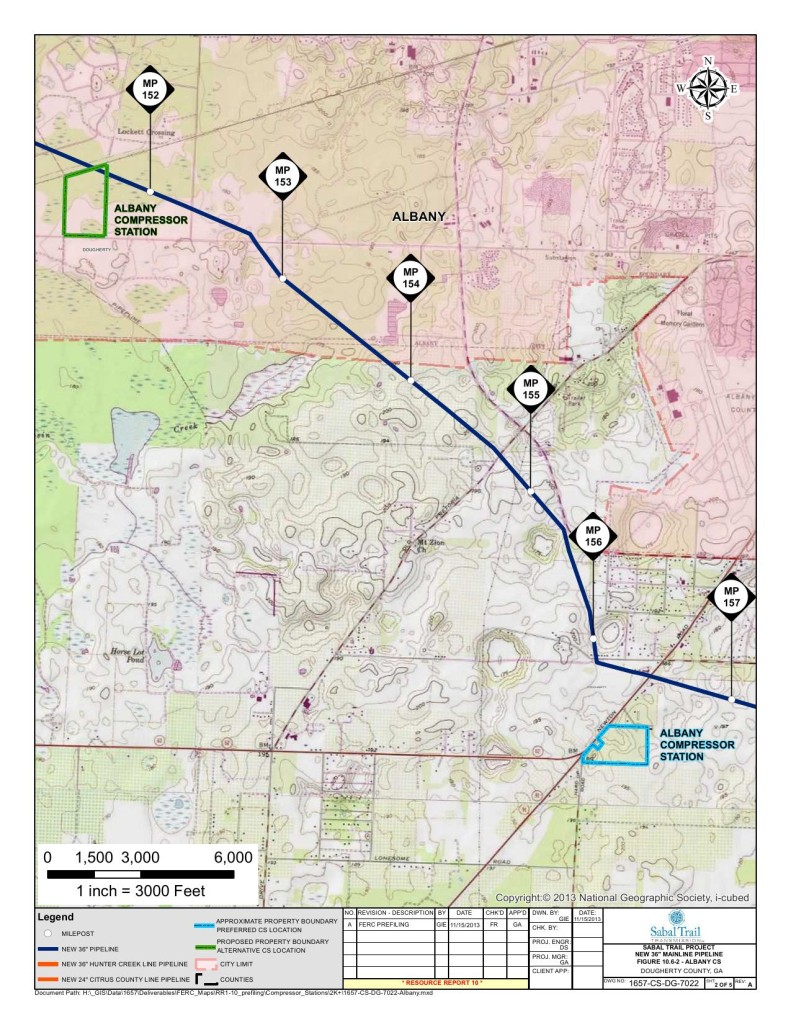 Imagine this dangerous and unsightly monstrosity on Newton Road, just south of the Albany Airport. If Dougherty County officials and residents fail to take decisive action to prevent it, you could see this project in operation by 2017….

The Sabal Trail Project, a natural gas pipeline is currently in the environmental planning stage. Spectra Energy, headquartered in Texas is proposing to develop the 460 mile pipeline starting in Tallapoosa County, Alabama, traversing through Southwest Georgia and Dougherty County and ending in Osceola County, Florida. The line would carry 1b cubic feet of natural gas per day through a 36 inch diameter pipeline buried about 3 feet below the surface. The pipeline and compressor stations are without question dangerous to human life and the natural environment. There are countless cases of explosions and other forms of dangers to the well-being of communities where there pipelines exist. The compressor stations are noisy and emit horrible smells, particularly when pressure is periodically released into the atmosphere. We must also be concerned about property values. Who would want to buy property next to a compressor station or pipeline or anywhere in the county where it is located? A scary fact in this whole matter is that private land can be taken through the power of eminent domain, if the project is approved.

Citizens must act now. All of our elected officials must remain engaged in this process and work with us to prevent the pipeline and the compressor station from locating in the most populated county in Southwest Georgia.

And remember, not just Albany, Dougherty County, or Georgia: this thing starts in Alabama, runs through Georgia, and through Florida to the sea where there are already three authorized LNG export operations that would run up the price of domestic “natural” gas for everybody in U.S. and Canada while damaging watersheds from the Marcellus Shale in Pennsylvania through all the affected states.