FERC can’t even say how many pipelines have been approved, rejected, or went forward even if approved; no wonder they’re being scrutinized. 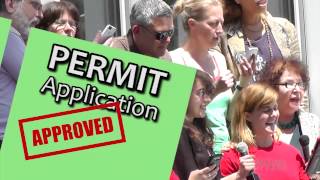 The Federal Energy Regulatory Commission these days is drawing a crowd of companies promoting projects linked to the U.S. natural gas boom and protesters who say the agency blithely greenlights too many pipelines, export terminals and other gas infrastructure.

Other FERC critics have taken to Facebook and Twitter or created their own websites to skewer the agency. Women calling themselves the “FERC-etts” sing a spoof of the Beatles’ “Yellow Submarine”: “We all know FERC’s a rubber-stamp machine.”

And Jeff Tittel, director of New Jersey’s Sierra Club, tells his FERC joke: “They’re the Will Rogers of regulatory agencies. They never met a pipeline they didn’t like.”

But do FERC foes have more than a punch line?

Since 2006, the agency has approved 451, or 56 percent, of 803 applications for pipelines, compressor stations, storage and liquefied natural gas export facilities. Of projects that failed to advance, 94 are pending and applications for 258 either were denied or were withdrawn by companies. FERC could not provide a more granular breakdown.

And not all 451 approved projects have moved forward, FERC spokeswoman Tamara Young-Allen said. Some failed to meet construction timelines or safety rules, she said.

Here’s a more granular breakdown: all FERC’s John Peconom could recall as ever being denied were two (2) pipelines. Sure, FERC did deny Strom Inc.’s LNG export application for Starke, Florida, but that was for lack of fee payment, the one thing up with which FERC will not put. And Strom just continued its application through the DoE’s Office of Fossil Energy, proposing to move location to Crystal River, Florida.

The article goes on with an industry source admitting FERC is set up to rubberstamp pipelines, not to deny them. It discusses landowner opposition, and that court ruling saying FERC has to take cumulative effects into consideration, which may have been one reason for FERC’s 26 August 2014 directions to Sabal Trail to take all sorts of things into consideration. And opposition certainly was the cause of the 15 October 2014 alternatives with the 15 November 2014 comment deadline that busted Sabal Trail’s 31 October 2014 formal filing target.

2 thoughts on “FERC nervous about being watched”