The people and state of Georgia can stop this Texas invader, and if that takes a California paper implying Texans are Yankees, so be it. As well as Kinder Morgan’s Palmetto petroleum products Pipeline, why not stop Spectra’s Sabal Trail fracked methane pipeline? You can sign the petition Georgia Governor Nathan Deal. 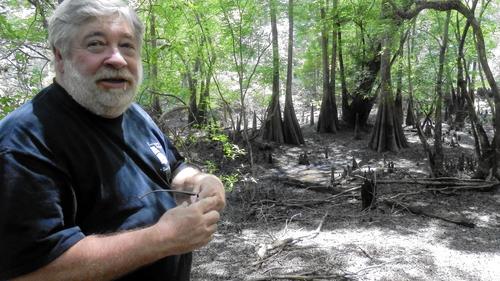 “I’m trying to protect something that was passed on to me,” said Georgia resident Jimmy Helmly, who opposes the pipeline. “People from away from here, with no ties, just want to make a dollar. I understand. I believe in American capitalism. But why should I sacrifice so you can make billions?”

When the letter arrived from a Texas pipeline company asking permission to enter his land, Alan Zipperer refused to allow surveyors onto his property.

But they came anyway, he said, traipsing through his corn fields and pine forests and sticking wooden stakes in the low-country land his family has owned since the 1700s.

“I don’t want a private company to build a gasoline pipeline in my front yard — or anywhere on my property,” he said. “They told me the same thing they told others: ‘We’re a big company, we’re coming, and the state of Georgia can’t stop us.'”

The pipeline’s opponents argue it represents an unconstitutional use of eminent domain and an environmental threat.

Georgia Gov. Nathan Deal, a Republican, entered the fray May 7, announcing that the state would fight the $1-billion project in court. The Georgia Department of Transportation rejected the pipeline plan May 19, declaring it would not serve a public need.

The dispute is one of a growing number of skirmishes over pipelines nationwide. With the U.S. producing more oil and gas than it has in decades, private companies are clamoring to build new transportation infrastructure, said Alexandra Klass, a professor who specializes in energy law at the University of Minnesota.

One of two pipelines being proposed in Georgia, the Palmetto pipeline is particularly contentious because it would cross land owned by the state’s House majority leader, Jon Burns, and a local media tycoon, William S. Morris III, who owns newspapers in Augusta, Savannah and Jacksonville, Fla.

The other one is of course Sabal Trail, which has already three times sued Georgia landowners to try to get Georgia eminent domain.