Ted Turner’s Nonami plantation near Albany, Georgia has filed a motion to intervene with all three parts of the fracked methane pipeline project including Sabal Trail, using a form of filing that other groups could copy. 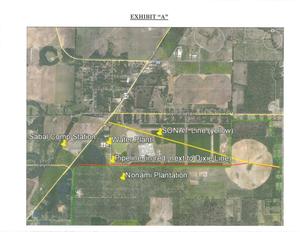 Intervenor is a landowner with land laying both within the proposed right-of-way corridor for the Sabal pipeline and within very close proximity to one of Sabal’s proposed compressor stations, thus exposing its property to condemnation and deleterious effects associated with the construction and operation of a natural gas transmission pipeline and deleterious effects of a compressor station.

Via Greenlaw, comments on GA-EPD air permit application #22637. Sinkholes, CO2, NOX, VOCs, potential damage to people, animals, longleaf pine trees, air, and water. The best part: Nonami recommends if the compressor station should be built, it should be powered by solar panels. If others want to file comments, the application number and the address are in here. -jsq