No Public Need, Just Pollution and Greed, said the sign that summed up the overwhelming sentiment of the public.

Speaker after speaker stood up before a packed room to voice opposition to the pipeline and Kinder Morgan’s application to the Georgia Department of Transportation for a certificate of necessity and convenience.

The DOT said 528 people came to the hearing, and the agency plans to hold another hearing May 7 in Waynesboro. It also would take written comments through May 15.

If granted, the certificate would allow Kinder Morgan to END_OF_DOCUMENT_TOKEN_TO_BE_REPLACED 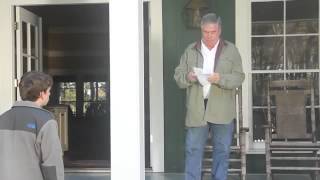 Lowndes County citizen Larry Rodgers received this letter from Sabal Trail as dramatized in this video, which also contains many “Pipeline? No!” signs with spectrabusters.org on them, thanks to WACE. That letter and a response by Larry Rodgers’ attorney Bill Langdale are included with the SpectraBusters letter to the judge in Leesburg, GA, where Sabal Trail is demanding eminent domain authority against other landowners, and those landowners are countersuing for criminal trespass. END_OF_DOCUMENT_TOKEN_TO_BE_REPLACED

SpectraBusters, Inc. is a Georgia nonprofit corporation with board members and other participants in all three states directly affected by the Sabal Trail proposed pipeline: Georgia, Florida, and Alabama. The SpectraBusters board voted Monday March 30th 2015 to send this letter to the court to express our concerns about Sabal Trail’s attempts to claim Georgia eminent domain long before it tried to claim customers in Georgia, as well as possible ill effects throughout the pipeline route, especially in Georgia, if the judge were to rule in this case for application of Georgia eminent domain. Even with Sabal Trail’s claimed agreement with the Metropolitan Gas Authority of Georgia (MGAG), Sabal Trail is still “a long way” END_OF_DOCUMENT_TOKEN_TO_BE_REPLACED

Electric Power & Light has more of the text: END_OF_DOCUMENT_TOKEN_TO_BE_REPLACED

Filed with FERC 1 April 2015 as END_OF_DOCUMENT_TOKEN_TO_BE_REPLACED