Many people are concerned END_OF_DOCUMENT_TOKEN_TO_BE_REPLACED

that’s what the Georgia Department of Natural Resources Board proposes to vote on this Wednesday morning, in Atlanta, far from any of the proposed crossings or the directly affected counties, with no publ ic hearing and minimal public announcement. You can call them or send them email to ask them not to do that. Or show up in Atlanta 9AM Wednesday 23 September 2015 and speak; bring a written statement if you do that. Atlanta metro people, we need you to go to that meeting!

SpectraBusters, Inc. is a Georgia nonprofit corporation with board members and other participants in all three states directly affected by the Sabal Trail proposed pipeline: Georgia, Florida, and Alabama. The SpectraBusters board voted Monday March 30th 2015 to send this letter to the court to express our concerns about Sabal Trail’s attempts to claim Georgia eminent domain long before it tried to claim customers in Georgia, as well as possible ill effects throughout the pipeline route, especially in Georgia, if the judge were to rule in this case for application of Georgia eminent domain. Even with Sabal Trail’s claimed agreement with the Metropolitan Gas Authority of Georgia (MGAG), Sabal Trail is still “a long way” END_OF_DOCUMENT_TOKEN_TO_BE_REPLACED

Filed with FERC 1 April 2015 as END_OF_DOCUMENT_TOKEN_TO_BE_REPLACED

Albany Audubon Society, and Albany, Georgia, the county seat of Dougherty County, which filed the previous day, Today’s the deadline! Here’s how to file a motion to intervene.

Plus yesterday the Municipal Gas Authority of Georgia (MGAG) filed. MGAG is the customer Sabal Trail claimed in Georgia so it could try to exercise Georgia eminent domain. Sabal Trail said Dougherty and Colquitt were the counties despite both Dougherty County and Albany having already passed resolutions wanting no Sabal Trail in their city, county, or state, Colquitt County having passed a resolution against the pipeline, and the Mayor of Moultrie saying on WCTV that Moultrie had never been asked if they needed or wanted any gas.

Maybe today we’ll see motions to intervene by Lowndes County and Valdosta, both of which have passed resolutions against the pipeline.

That Brooks County motion is hard to find, being filed as END_OF_DOCUMENT_TOKEN_TO_BE_REPLACED

END_OF_DOCUMENT_TOKEN_TO_BE_REPLACED

Brooks County landowners don’t have to surrender at the first offer of eminent domain. Like Georgians at Fort Morris to the British invaders of 1778, they can give this laconic reply:

Come and Take It! 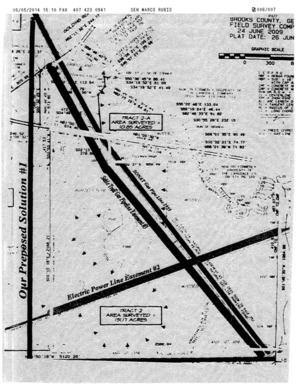 Florida’s other Senator just intervened with FERC on behalf of a landowner who has been trying to get reasonable solutions out of Spectra Energy since at least December. Sabal Trail is trying to force their unnecessary pipeline through this Brooks County, Georgia property among others that already have a gas pipeline: this one also already has an FPL power line. Why should FPL get to deface anybody’s property for both a power line and a pipeline while destroying wetlands and trees? Why do we think this will be the last pipeline if it is allowed to go in? As the Ryders ask, “If this was your farm, how would you like it divided?” How about not at all?

Why would a pipeline company from Houston suffer irreparable harm if it couldn’t go onto the land of somebody in Georgia? A judge in one Georgia county bought Sabal Trail’s eminent domain assertions and now Sabal Trail is citing that to try to get a landowner in Brooks County to let it on the property to survey for its fracked methane pipeline. What about private property rights? 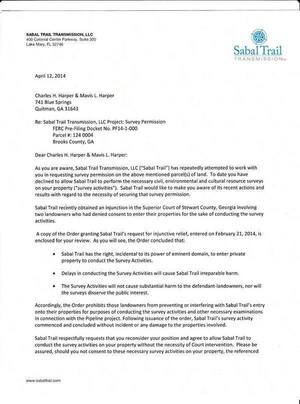 The letter dated 12 April 2014 from Sabal Trail includes this part:

A copy of the Order granting Sabal Trail’s request for injunctive relief, entered on February 21, 2014, is enclosed for your review. As you will see, the Order concluded that:

Accordingly, the Order prohibits those landowners from preventing or interfering END_OF_DOCUMENT_TOKEN_TO_BE_REPLACED

This weekend’s boat outing is cancelled due to flood-stage water levels in the Withlacoochee River, with more rain expected Friday. To be rescheduled.