This a very dangerous and unhealthy addition of unregulated END_OF_DOCUMENT_TOKEN_TO_BE_REPLACED

Brendan Keefe and Michael King, WXIA-TV, 22 May 2015, Legislators and corporate lobbyists meet in secret at Georgia resort. They found out quite a bit before ALEC had off-duty deputies throw them out of their hotel. END_OF_DOCUMENT_TOKEN_TO_BE_REPLACED and part of FPL’s site converted to a proposed solar plant. More can be done, but this shows county commissions can fight even mighty FPL, plus Sabal Trail’s pipeline, the likely source of the gas.

Tuesday April 5th Suwannee County voted 4 to 1 , with chairman Bashaw dissenting, to send a letter requesting that the Corps perform an independent environmental study concerning the geological omissions Sabal Trail withheld from their Environmental Study submitted to FERC to receive a permit to bore under the Suwannee River.

After comparing Sabal Trail’s EIS with that of local geologist Dennis Price, Chris Mericle discovered omissions and discrepancies in this report endangering the Floridan Aquifer which supplies 60% of Florida’s water supply as well as endangering millions of citizens and hundreds, if not thousand, of springs.

Sabal Trail submitted information for the pipeline permit to FERC stating the closest sinkhole to the pipeline route boring under the Suwannee River would be 750′ from the pipeline which is not true. Commissioner Wainwright and other BOCC officials discovered one active sinkhole 75′ from the 36″ fracked gas pipeline. In fact there is a sinkhole smack in the middle of the pipeline route with sinkholes covering the entire area.

SBOCC discovered this after attending a hike of the pipeline route and Falmouth Springs, which is part of a interconnected cave system that extends to the Suwannee River crossing at Suwannee River State Park which Sabal Trail claims is 100′ underground, when in fact one can see the springs practically at ground level and is part of this connected cave system and caverns named the Falmouth Cathedral Cave System. There are in fact many of these cave systems all connected within the pipeline route and throughout Florida.

Thank you SBOCC and all who assisted in this effort.

All counties in North Florida and central Florida should follow suite.

Perhaps a RICO investigation by the US Attorney General of Spectra Energy/Sabal Trail and the oil industry funded pipeline government agency, FERC, as well as invested Florida governor Scott is in order.

I do believe the time has come to stop this dangerous gas pipeline to export the natural gas that fracking invested FPL, Duke Energy and NextEra wish to export to other countries with zero benefit to the citizens of Florida.

and by notorious financial blog Zerohedge, as reasons why Sabal Trail may lose.

Eminent domain is a tough pill to swallow for Americans who take their property rights very seriously, and the aggressive moves by Sabal Trail to seize property for a natural gas pipeline running through three southern states is turning into a drama of immense proportions.

The rest is the best story I’ve seen about END_OF_DOCUMENT_TOKEN_TO_BE_REPLACED

The Greenpointe property is one of the biggest END_OF_DOCUMENT_TOKEN_TO_BE_REPLACED

END_OF_DOCUMENT_TOKEN_TO_BE_REPLACED

Just before Christmas, when the fewest people will be paying attention, 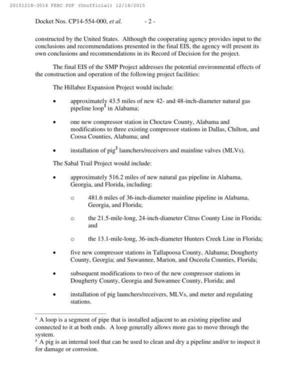 FERC just issued for Sabal Trail, FSC, and Transco Hillabee the Final Environmental Impact Statement (FEIS), aiming at March to rubberstamp a permit. You can still ecomment to FERC, or to the U.S. Army Corps of Engineers or to GA-EPD or ask your local, state, and federal elected and appointed officials to oppose this unnecessary, destructive, and hazardous boondoggle.

Curious how EPA changed its tune just before the FEIS.