Cathy Castor (FL-14) and John Barrow (GA-12) are on the oversight committee for FERC that had all the FERC Commissioners testify 5 December 2013: the Subcommittee on Energy and Power of the Committee on Energy and Commerce. Shouldn’t they be interested in hearing about the Sabal Trail pipeline? Each time someone files a comment with FERC, the filer could also send it to that subcommittee or their member of it, or their own member of Congress or Senators.

Unlike the other subcommittee that held a hearing pushing LNG exports, the Subcommittee on Energy and Power has the appropriate jurisdiction: 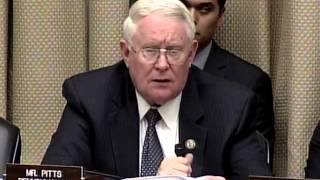 Not only fossil energy, also renewable energy, such as solar and wind. Not only utility issues, but also interstate energy compacts. Not only pipelines, but also the Clean Air Act and air emissions.

There’s nobody from Alabama, but one each from Florida and Georgia.

She wrote on her House website about the Deepwater Horizon Oil Disaster, The Gulf Coast’s economy and environment were hard hit by the BP oil disaster. Though no oil reached the shores of the Tampa Bay area, our small businesses, hotels and tourism industry suffered. I am committed to restoring our environment and making sure our businesses recuperate from the devastation.

That is why one of my top priorities this congressional term was to direct 80 percent of the fines and penalties to be paid by BP for violations of the Clean Water Act to restoring the Gulf Coast….

Drilling too close to shore imperils our economy, environment and security. This disaster in the Gulf of Mexico proves that oil drilling should not be allowed even one mile closer to the west coast of Florida. It is simply not worth the risk.

And the Sabal Trail gas pipeline is simply not worth the risk when Florida can move directly to solar power.

On his House website his energy platform does have some promising points:

There’s no question that folks in Georgia are worried about energy issues, from rising power bills, to reducing greenhouse gasses, to lessening America’s dependence on foreign oil. That’s why I’ve hosted Energy Expos in Augusta, Savannah, and Statesboro and had town hall meetings in every county in the 12th District, so I have time to listen to the folks I represent….

While I believe that global climate change is a huge concern, and we need to do everything we can to create new sources of energy that are clean, cheap, and abundant….

…investment in research and development for clean energy and lower-emission automobiles….

He’s very behind the times about solar power and offshore wind:

This is difficult for states like Georgia, where there isn’t an abundance of wind or solar power.

But this could be an opportunity for him to learn more, and at least he doesn’t explicitly say he’s for gas pipelines.

He also has offices in 19 Georgia counties, four of which are open more than once a week.

The first regime, which applies to IRC 501(c)(3) public charities, permits these organizations to lobby so long as they do not devote a substantial part” of their activities to attempting to influence legislation.

An opinion of clarification by Jeffrey S. Tenenbaum Esq., Venable LLP for The Center for Association Leadership, May 2002, Top Ten Myths about 501(c)(3) Lobbying and Political Activity,

The right of citizens to petition their government is basic to our democratic way of life, and associations, including 501(c)(3)s, are one of the most effective vehicles for making use of citizen participation in shaping public policy. Fortunately, the legislation passed by Congress in 1976 makes it possible for 501(c)(3)s to lobby freely for the causes, communities and constituencies they serve.