FERC took a week to not supply what was requested in Beth Gordon’s FOIA, and apparently if you’ve organized your property under an LLC, your LLC name is visible on the redacted list, even if that name includes your personal name. Whose privacy is FERC protecting, anyway, now that all landowners along the proposed pipline path have had their privacy invaded by the pipeline company?

A list of each and every landowner in Florida contacted by Sabal Trail LLC by mail to inform them that they are on, or may be on, the proposed pipeline and/or proposed survey map for this project.

A redacted version of the Sabal Trails landowner list that was submitted to FERC of October 4, 2013 in docket number PF-14-1 has been previously released under the Freedom of Information Act (FOIA). This document is identified in the FERC e-library as accession number 20131004-5123 (Appendix B). Please find attached part 1 and part 2 of this redacted list. Additional emails will be provided with the remainder of this material. We will also provide a courtesy copy of the public cover letter for this submittal.

Here are the four parts of the redacted list emailed by FERC: Part 1, Part 2, Part 3, and Part 4. 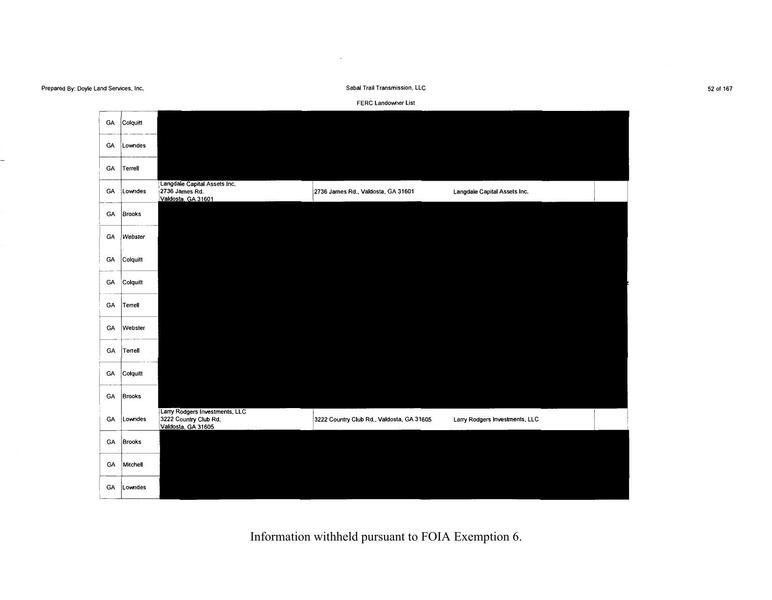 Yes, that’s the same Larry Rodgers whose name already appeared, along with all the other landowners along the proposed pipeline path in Lowndes County, Georgia, in the local newspaper. But the redacted FERC list doesn’t even include the physical address of the property the pipeline company wants to go through! If you’re interested, it’s in the letter from Larry Rodgers’ attorney rejecting the pipeline company’s claim of eminent domain.

But if Larry Rodgers’ address hadn’t already been made public, FERC just did so. Why would that not be a violation of his privacy, if releasing the contact addresses of any of the other landowners would be a violation of their privacy?

Apparently exemption 6 is simply a privacy concern. However since FERC is a government agency, and cannot waive an individual’s privacy rights, I am of the opinion that they cannot assert them either.

And how can there be privacy expectations in your name, and mailing address? It has already been published to FERC by a private corporation. It’s something most people give out freely anyway.

Hasn’t Spectra’s barrage of letters last summer and fall invaded that “privacy?” Or is FERC now just protecting what can only be described as Spectra’s proprietary interest in the lists? I suppose the argument would be that they spent time and money getting those lists from the appraisers’ offices- why should they give it up?

A good explanation of this exemption, what it is, and what it’s not, can be found at the Justice Department web site- http://www.justice.gov/oip/exemption6.htm

That DoJ writeup says, in part, that the Supreme Court ruled in 1982

that the protection of an individual’s privacy “surely was not intended to turn upon the label of the file which contains the damaging information.” (8) Rather, the Court made clear that all information that “applies to a particular individual” meets the threshold requirement for Exemption 6 protection. (9) This means, of course, that this threshold is met if the information applies to any particular, identifiable individual — which makes it readily satisfied in all but the most unusual cases of questionable identifiability.

So why doesn’t Larry Rodgers Investments, LLC, count? And why do all the other landowners in Lowndes County get redacted even though their contact information has literally been published in the newspaper?

Beth has filed an appeal with FERC.