Two hours of first questions from a citizens committee with Spectra’s reps expected to answer right there in front of everybody, then questions from locals and people from many counties around, including attorneys representing landowners and other county commissions cross-examining Spectra on the spot. The Chairman of the Gilchrist County Commission said there was a general opinion among the populace that they were asking specific questions and getting only general answers. Congratulations, Chairman, Commission, staff, Committee, and everyone who asked questions for showing the world how it’s done, and for exposing Spectra’s evasions to public scrutiny. 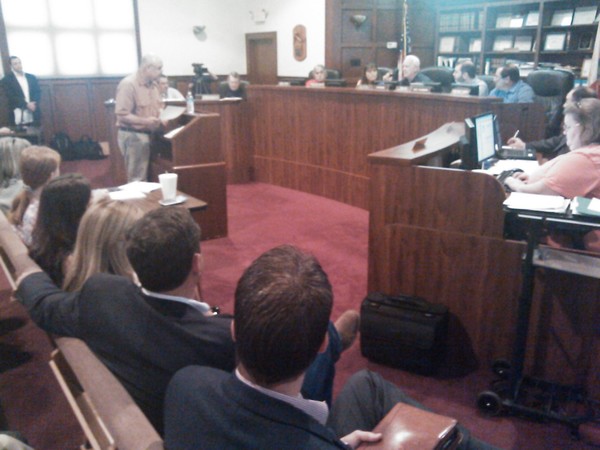 You’ll see for yourself in the videos of the whole thing. Almost all: so much both camera batteries ran down, and it took a bit to find a plug.

One of the citizen committee questions was about Spectra’s safety record. Brian Fahrenthold assured the commission that Spectra had a great safety record and the lived and breathed safety and soon on Spectra’s website there would be links to PHMSA’s material about Spectra.

A citizen brought up the Durham Woods Spectra pipeline explosion and apartment fire in Edison, NJ, which burnt many, evacuated thousands, made hundreds homeless, and literally scared one person to death, plus $25 million in property damage. Spectra hadn’t mentioned that.

SpectraBusters president Beth Gordon brought up the 1989 record $15 million EPA fine for Spectra leaking PCBs at 89 sites along a pipeline: the same Texas Eastern pipeline that blew up in Edison, NJ. She also mentioned Spectra’s PHMSA rap sheet, including the December 2012 Final Order from PHMSA to Spectra CEO Greg Ebel for failing to watch for or detect corrosion and leaks.

A Spectra expert responded that PCBs were a thing of the 1960s and 1970s and Spectra doesn’t use those anymore. So Spectra’s personnel at the meeting did actually know about that EPA fine, they just didn’t answer the Commission’s question until somebody else revealed it to the Commission.

Brian Fahrenthold reiterateed that they were going to have a link to PHMSA’s Spectra list on sabaltrail.com Real Soon Now.

Not only is that very late, but it’s also too little: it was the National Transportation Safety Board (NTSB) that reported on that Edison, NJ explosion and its $25 million of property damage, and it was EPA that fined Spectra for those PCB leaks.

Yet Brian Fahrenthold repeatedly said Spectra was transparent about safety and had a great record.

Who do you believe? People paid to say things that make Spectra look good? Or the public record that says otherwise?