Some residents of Lowndes County are ready to tell the federal government exactly how they feel about a natural gas pipeline running through their back yards. 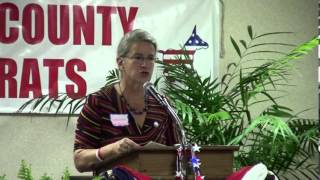 “The Georgia Democrats feel that there’s a moral obligation to leave the world as beautiful and majestic as we found it and the pipeline, it does not do that”, says Gretchen Quarterman, Chairman of the Lowndes County Democratic Committee.

The WCTV story also quotes Spectra’s Andrea Grover and gives the particulars of the Valdosta and Moultrie FERC Scoping Meetings. It adds this detail:

Georgia Democrats believe we have a moral obligation to leave our children and grandchildren with an earth as safe, beautiful, and majestic as the one bequeathed to us by our parents and grandparents.

The Sabal Trail Pipeline is proposed to move Liquid Natural Gas (LNG) from fracking sites to Florida. Fracking is a known polluting technique, leaving behind undrinkable water and unusable earth. Florida is the Sunshine State and could generate any needed electricity from less expensive and more environmentally friendly renewable sources of solar and wind.

Georgia Democrats believe in and uphold every citizen’s right to equal and impartial justice under the law.

The taking of privately owned property by a private company is a property rights issue. Putting corporations above citizens is not equal, nor is it impartial. Lowndes County property owners have a right to say who can and cannot use their property and a LNG pipeline that benefits no Georgians is a property rights violation.

Existing pipelines have a history of failures from poor monitoring and maintenance which have resulted in explosions, fires and deaths. The safety of Lowndes County citizens should be a top priority of our local and state governments.

The Committee urges citizens to attend the Federal Energy Regulatory Commission meeting on Tuesday, March 4th at 6:00pm at the Holiday Inn at 1805 West Hill Avenue Valdosta, GA 31601 and express their opposition to this pipeline.

The Lowndes County Democratic Party promotes development of Party organization and activities, seeks and encourages qualified candidates for public office, supports Democratic nominees, performs such election functions as are required by law, maintains appropriate records, promotes and adds logistical support to the State Affirmative Action program, and raises funds for the above purposes.