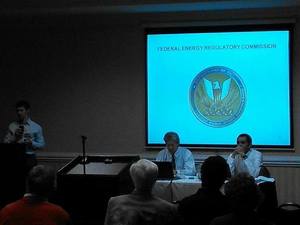 FERC is less transparent about a $3 billion project than a local library board was about a $10 million project. Last night in Valdosta FERC again failed to provide the RFP used in selecting the environmental contractor to be used on all three of the proposed connected methane pipelines. I’ve never heard of any other tax-funded agency refusing to release an RFP of which they have a copy. Have you?

FERC Kevin Bowman environmental protection specialist (pictured on the left) said he’d never heard anyone request an RFP before. He should talk to his FERC co-worker John Peconom (pictured on the right), because, as I mentioned when I stood up to talk, Peconom had already refused to release that RFP.

At the make-up Open House in Moultrie I asked John Peconom for:

This is the text of email from John Peconom of FERC to me 10 February 2014:

In response to your questions regarding Merjent:

Here’s all that FERC Approval of Pre-Filing Request: Sabal Trail Project says about acceptance of Merjent:

My staff has reviewed the proposals submitted for the selection of one third-party contractor to assist us in preparing the National Environmental Policy Act documentation required for the Sabal Trail, Transco, and FSC Projects. We have selected Merjent, Inc. (Merjent) as the third-party contractor to work under the direct supervision and control of the Commission staff for all three projects. I request that you, Transco and FSC proceed with executing a contract with Merjent so work may begin as soon as possible.

This is the real answer to my first question:

It says in part:

Following a decision to use a 3PC and before an application is filed or a request for use of the Commission’s Pre-Filing Process is submitted, the applicant will prepare a draft Request for Proposals (RFP). The draft RFP will contain a list of screening criteria and an explanation of how the criteria will be used by the applicant to select the best three candidates from the contractors who respond to the RFP. If the RFP will be offered to specific contractors only, the draft RFP submitted to the OEP staff will be accompanied by a list of the targeted contractors.

So the RFP was prepared by the pipeline companies, which is what Peconom said last night (but not what he said in Moultrie). However, the Handbook clearly says OEP staff has to have a copy of the draft RFP before the applicant uses it. So tax-funded FERC staff spent tax-funded time reviewing an RFP required by a tax-funded handbook. How can FERC refuse to supply a copy of that RFC?

The Handbook also says the RFP has to contain screening criteria and “an explanation of how the criteria will be used”, which would answer my second question. If we could see that RFP.

The Handbook also says the applicant has to provide a list of the companies being considered. FERC’s own response to Sabal Trail says “My staff has reviewed the proposals” so FERC has copies of the proposals. FERC not only refused to supply even one of the proposals, it didn’t even provide that list which its own Handbook says FERC has. Did they even have more than one candidate? How can we know, if we can’t see the list?

How can a tax-funded agency justify this kind of stonewalling behavior? Here’s an example of what I was looking for, documents received in response to an open records request for the selection of an architect for a local library. Here are the actual documents: the RFP, all of the proposals, the decision process, documents showing how the process was followed and how it was not, and the minutes of all the relevant library board meetings.

Sometimes local government bodies deliver a three-ring binder of papers. Sometimes they deliver a CD. Sometimes they deliver on a USB stick. The South Georgia Regional Library Board delivered all of those. Never have I seen a tax-funded government agency refuse to deliver anything, like FERC has done. That’s right, FERC is less responsive about a $3 billion project that would bring nothing but hazards and destruction here, than a local library board was about a $10 million project that might have built us facilities we could actually use locally.

Does that seem right to you?

2 thoughts on “FERC refuses to release RFP for environmental contractor”