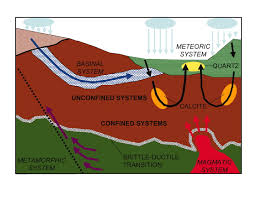 Surely such chemicals completely bypass drinking water aquifers? Or if they don’t, maybe we should object to discharge of pipeline testing water, which means objecting to pipelines like Spectra’s Sabal Trail.

A team of geoscientists have shown that rainwater penetrates far more deeply into the Earth’s surface than thought before. Isotopic analysis of minerals brought up by tectonic plate uplifting reveals that rainwater reaches up to and perhaps beyond the brittle ductile transition zone (BDTZ) at 6 to 8 kilometers in depth (for this study, as the BDTZ depth varies from place to place) . The BDTZ is where the crustal rock changes from being brittle to being ductile as the pressure and temperature increases at greater depths.

The study is Incursion of meteoric waters into the ductile regime in an active orogen, Earth and Planetary Science Letters Volume 399, 1 August 2014, Pages 1–13, DOI: 10.1016/j.epsl.2014.04.046. Note that “meteoric waters” is a technical term for weeather-precipitated water such as rain.