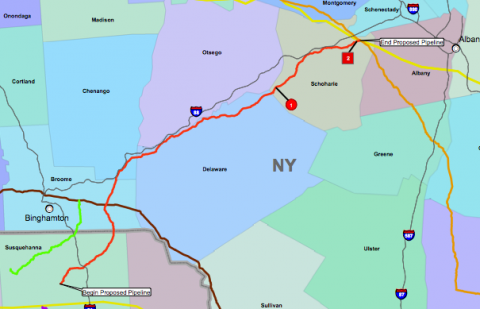 Opponents say that property values along and nearby

the roughly 50-foot-wide pipeline right of way would lose value. The company’s website, www.kindermorgan.com, dismisses that claim, saying research shows pipelines have little or no impact on property values. One of the sources the company cites in support of that conclusion is the INGAA Foundation, founded by the Interstate Natural Gas Association of America, which represents gas pipeline companies. Not exactly an impartial source.

Not to mention that INGAA whitewash paper is from 2001, before the fracking boom and the LNG export craze.

Same script Sabal Trail has been reading from, and this editorial properly laughs at it.

The editorial also doesn’t think much of PHMSA’s safety record or the alleged need to build a new compressor station and the alleged need for the massive amount of fracked methane the Constitution Pipeline NED would carry. Then it starts focussing on its main point.

While a larger pipeline does pose some risk to the county, that argument by itself sounds selfish compared to the presumed benefit consumers throughout the region might get from more plentiful gas supplies. But when you include the environmental damage that results from fracking, whether it’s caused by the secret brew of toxic fluids used to extract the gas or the shoddy plumbing on the wells themselves, the pipeline equation begins to shift.

Environmental damage from drilling is a big cost and Kinder Morgan isn’t going to pay for any of it. But Pennsylvanians will. Should we New Yorkers support a project that pollutes the water in our neighbors’ wells so much that you can ignite it with a match?

The country still needs natural gas, and a new pipeline might be necessary to replace one nearing the end of its useful life. But the scope of what Kinder Morgan proposes is far greater than what this region will need… unless you assume that we will never wean ourselves from our perilous reliance on fossil fuels.

Supporting the pipeline proposal as it stands amounts to surrendering our future to the petroleum industry. It accepts the proposition that we bear no responsibility for the changes already apparent in our climate here—that we are helpless to act. But opposing the pipeline in its present form puts the company and the industry on notice that we want change and we want it to start with here and now.

Ditto for the Sabal Trail pipeline.

Bill Huston has supplied details about NED and the Constitution Pipeline:

Here are some suggestions for resolutions or ordinances.