Usually it’s pipelines that explode, but 20 firetrucks rushed to a methane power plant in Didcot, Oxon, tonight. Somebody remind me: why are we building more of these when solar power is cheaper, faster, cleaner, and never leaks or explodes? 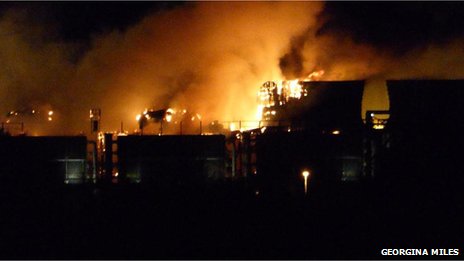 Fire crews have been battling a major blaze at Didcot B Power Station, Oxfordshire Fire and Rescue has said.

At the height of the fire, which broke out in one of the cooling towers, 20 fire appliances were are at the scene

Energy company RWE npower, which owns the gas-burning power station, has said the fire is now under control and there have been no injuries.

Police have warned local people to stay indoors and close their doors and windows.

The plant was shut down and all areas isolated before crews moved in to tackle the fire.

Jason Collie reported for Oxford Mail today, Update: Fire at Didcot Power Station under control and ‘no risk to the public’ + Video of blaze. The same video by atmospheric scientist Dr. Georgina Miles, unfortunately not embeddable, is also on ITV.