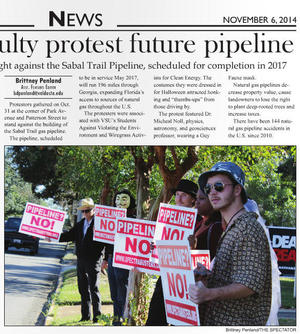 Protestors gathered on Oct. 31 at the corner of Park Avenue and Patterson Street to argue against the building of the Sabal Trail gas pipeline.

The protesters were associated with VSU’s Students Against Violating the Environment and Wiregrass Activists for Clean Energy. The costumes they were dressed in for Halloween attracted honking and “thumbs up’s” from those driving by.

Another protest is scheduled for today at 4PM at 2110 North Patterson Street, at the corner of Park Avenue, followed by speaking at the Lowndes County Commission Regular Session at 5:30 PM; facebook event. 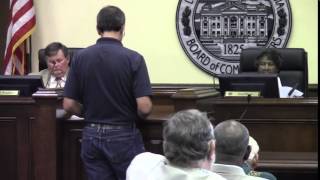 Here is LAKE video of Dr. Michael Noll speaking for WACE at the previous Commission Regular Session 28 October 2014. He mentioned that Dougherty County had just passed a resolution against the pipeline and Lowndes County could, too.

I hear he also spoke at the most recent Valdosta City Council meeting. It’s refreshing to see somebody other than me speaking about the pipeline at local government meetings.