A Colquitt County resident spelled out a series of eminent domain threats to her, plus the background of the infamous Stewart County eminent domain ruling Sabal Trail has used to threaten landowners in other counties. 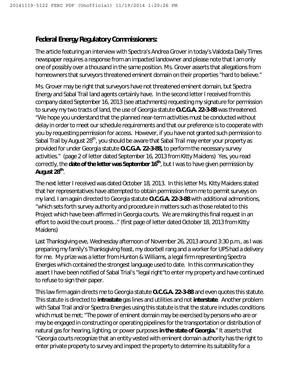 The article featuring an interview with Spectra’s Andrea Grover in today’s Valdosta Daily Times newspaper requires a response from an impacted landowner and please note that I am only one of possibly over a thousand in the same position. Ms. Grover asserts that allegations from homeowners that surveyors threatened eminent domain on their properties “hard to believe.”

Ms. Grover may be right that surveyors have not threatened eminent domain, but Spectra Energy and Sabal Trail land agents certainly have. In the second letter I received from this company dated September 16, 2013 (see attachments) requesting my signature for permission to survey my two tracts of land, the use of Georgia statute O.C.G.A. 22-3-88 was threatened.

“We hope you understand 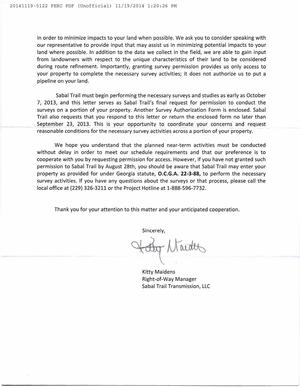 that the planned near-term activities must be conducted without delay in order to meet our schedule requirements and that our preference is to cooperate with you by requesting permission for access. However, if you have not granted such permission to Sabal Trail by August 28th, you should be aware that Sabal Trail may enter your property as provided for under Georgia statute O.C.G.A. 22-3-88, to perform the necessary survey activities.”

(page 2 of letter dated September 16, 2013 from Kitty Maidens) Yes, you read correctly, the date of the letter was September 16th , but I was to have given permission by August 28th. 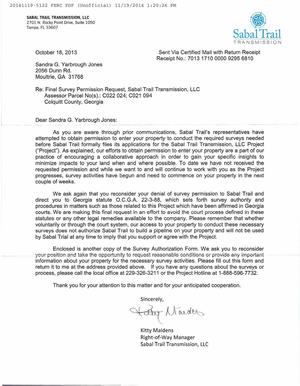 The next letter I received was dated October 18, 2013. In this letter Ms. Kitty Maidens stated that her representatives have attempted to obtain permission from me to permit surveys on my land. I am again directed to Georgia statute O.C.G.A. 22-3-88 with additional admonitions,

“which sets forth survey authority and procedure in matters such as those related to this Project which have been affirmed in Georgia courts. We are making this final request in an effort to avoid the court process…” 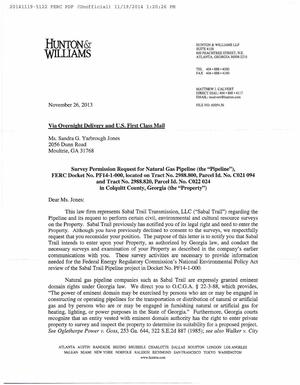 Last Thanksgiving eve, Wednesday afternoon of November 26, 2013 around 3:30 p.m., as I was preparing my family’s Thanksgiving feast, my doorbell rang and a worker for UPS had a delivery for me. My prize was a letter from Hunton & Williams, a legal firm representing Spectra Energies which contained the strongest language used to date. In this communication they assert I have been notified of Sabal Trial’s “legal right“to enter my property and have continued to refuse to sign their paper.

This law firm again directs me to Georgia statute O.C.G.A. 22-3-88 and even quotes this statute. This statute is directed to intrastate gas lines and utilities and not interstate . Another problem with Sabal Trail and/or Spectra Energies using this statute is that the stature includes conditions which must be met;

“The power of eminent domain may be exercised by persons who are or may be engaged in constructing or operating pipelines for the transportation or distribution of natural gas for hearing, lighting, or power purposes in the state of Georgia.

“Georgia courts recognize that an entity vested with eminent domain authority has the right to enter private property to survey and inspect the property to determine its suitability for a proposed project.”

(page 1 of letter dated November 26, 2013 from Matthew Calvert). In plain English, they were coming on my land even if I did not give permission.

The last threat came in a packet mailed to me and dated April 12, 2014. Ms. Maidens again explains that I have declined to allow Sabal Trail survey permission and wanted to make me aware of its recent actions and results. They included the entire court record of the proceeding where they carried two people to court in Stuart County. She states that the order concluded that

FERC commissioners, it must be noted that Sabal Trial sued two entities. One being William B. Singer and Frank S. Singer III, and the other being the estate of Harold L. Westbrook. Mr. Westbrook was a nursing home resident with Alzheimer’s disease and he died shortly before the court date. The Singers were also absent from this hearing because of a mix-up about the court date. None of the defendants were present. In his decision the judge makes note that this decision is only binding in the case of the Singers and cannot be applied in other cases.

Not only does this company twist and bend our state laws, they seem to pick on those less able to defend themselves. There was another court hearing in Mitchell County involving another Alzheimer’s patient. The wife agreed to the survey after entering the court house and being placed under tremendous pressure. Another example of this is this company’s insistence of going through Daugherty County and placing the homes and lives of thousands of indigent Afro-Americans.

Georgia law holds that surveying or entering private property without permission constitutes trespass and that have been three cases where this company has been brought to court and is being held responsible for their breech of law. The only reason many landowners have signed for the survey is

because of these terroristic threats made by this company. As the reasonable and law abiding commission you are, you must halt this company from strong-arming land and home owners into submission for their purpose. Ms. Grover knows the truth even though her lips try to deceive. What she is doing is making a mockery of all of us.

Here’s another example of Sabal Trail using that Stewart County injunction as a threat against a landowner elsewhere.