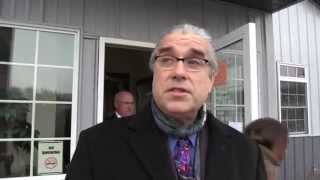 This, Sabal Trail, is what a historical precedent looks like. They protested fracked methane storage, were arrested, charged, and the charges were just dismissed with prejudice, which means they case can’t be brought back on those charges. Everything they said about Seneca Lake applies equally to the Sabal Trail pipeline, the Palmetto Pipeline, Elba Island LNG export, and the rest of the whole cash-out-before-the-carbon-bubble-pops fossil fuel boondoggle.

Sometimes, in good conscience, citizens must engage in non-violent acts of civil disobedience to protect our sacred trust.

Surveying for the unnecessary, destructive, and hazardous Sabal Trail fracked methane pipeline is not “imperative”, no matter how many threatening letters Sabal Trail sends. These are our sacred trust: water, air, fields, forests, children, adults, and yes, the lands in which we have invested our finances and labor.

In Reading Town Court the judge stood with the protesters. Judges in Georgia, Florida, and Alabama should stand with their own citizens.

Watkins Glen, NY — In three speedy hearings on Wednesday night in the Town of Reading court, Judge Raymond Berry granted a motion to dismiss all charges “in the interests of justice” brought by 42 Seneca Lake protesters. All had been arrested as part of a sustained civil disobedience campaign at the gates of Crestwood Midstream.

The campaign, We Are Seneca Lake, opposes the expansion of gas storage in abandoned lakeside salt caverns owned by Crestwood.

Further, attorneys for the defendants announced that an agreement had been reached with the Schuyler County district attorney’s office to accept identical dismissal motions from the roughly 100 other civil disobedients also charged with trespassing and disorderly conduct relating to protests at Seneca Lake and whose cases are still pending. At least 20 cases have been transferred to other area courts in Schuyler County.