Gasland posted on facebook a picture of an ad against fracking, pipelines, and LNG export in the New York Times 9 July 2015 by Yoko Ono, Gasland, Food and Water Watch, and many other groups. 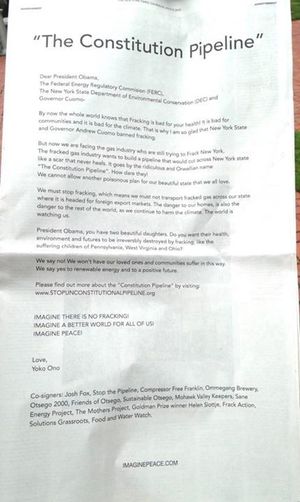 Everything it says applies as much to Alabama, Georgia, and Florida and the Williams-Spectra-FPL Transco-Sabal Trail-FSC fracked methane pipeline chain as it does to New York and Williams’ “Constitution Pipeline”. Here are a few excerpts:

By now the whole world knows that Fracking is bad for your health! It is bad for communities and it is bad for the climate. That is why I am so glad that New York State and Governor Andrew Cuomo banned fracking.

But now we are facing the gas industry who are still trying to Frack New York. The fracked gas industry wants to build a pipeline that would cut across New York state like a scar that never heals. It goes by the ridiculous and Orwellian name “The Constitution Pipeline”. How dare they!

We cannot allow another poisonous plan for our beautiful state that we all love.

We must stop fracking, which means we must not transport fracked gas across our state where it is headed for foreign export markets. The danger to our homes, is also the danger to the rest of the world, as we continue to harm the climate. The world is watching us.

We say yes to renewable energy and to a positive future….

IMAGINE THERE IS NO FRACKING!
IMAGINE A BETTER WORLD FOR ALL OF US!
IMAGINE PEACE!

And don’t forget to sign the Petition to Georgia Governor Nathan Deal: Oppose Sabal Trail like you oppose the Palmetto Pipeline.