Nobody says it better than Dougherty County native Gloria Gaines, this time at the protest last Saturday at the Albany Sabal Trail office. 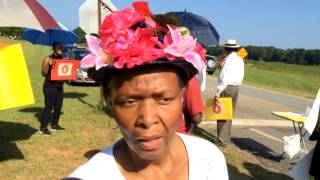 This is a terrible imposition on this majority African-American community….

It is a terrible environmental justice against this community. And I’m just happy to see all the people out here today, because they clearly understand: if we don’t want this in our community, that we must stand up and say so….

This is our beloved Dougherty County and we’re all fighting to keep it as it is. If this pipeline and this compressor station comes through here, nobody’s going to want to come live here anymore and we’re just going to die on the vine.


This compressor station is a terrible injustice against this community –Gloria Gaines 2015-07-11
Video by Thomas Swain.

Remember to comment to FERC about Sabal Trail and that Albany compressor station.

And remember to sign the Petition to Georgia Governor Nathan Deal: Oppose Sabal Trail like you oppose the Palmetto Pipeline.

Then ask your elected and appointed officials to act.

Here are more things local, state, and national elected officials can do.