The defendant in the lawsuit, Cabot Oil and Gas Corp., had strenuously denied that it had caused any harm to the plaintiffs or their drinking water. In 2012, the company reached a settlement with roughly 40 other residents along Carter Road in Dimock, but the terms of that settlement were never made public and included a “non-disparagement” clause that prevents those who settled from speaking out about their experiences with Cabot.

The verdict, which was reported by the Associated Press, comes as long-awaited vindication for the Hubert and Ely families, who had refused to settle in part because they wanted their voices heard, they said at a press conference when the trial began in Scranton on February 22.

The lawsuit had stretched on for roughly seven years, and the plaintiffs were at one point forced to represent themselves in court after being unable to find legal counsel following the settlement of the vast majority of the plaintiffs.

Without any foundation or major donor backing, tiny Energy Justice Network, namely Alex Lotorto and Allison Petryk, got a federal jury trial for the residents of Dimock Pennsylvania. And won.

Is this America or not? … This is a democracy… and we can’t let them take control. It’s like the gas and oil companies are taking over everything, they want to do anything they want, and they’re getting away with it. But we gotta hurt them big…. They’re going to have to pay.

And they just did. It’s not the total amount of money, although that’s far bigger than the average fine. It’s the precedent. 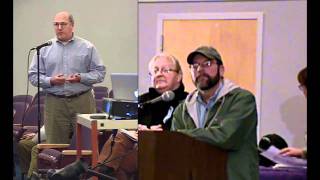 Here’s the press release from the Energy Justice Network press kit, which also includes a timeline going back to 2008, when the Sautner family first complained to the Pennsylvania Dept. of Environmental Protection about their tap water and Cabot Oil and Gas.

The plaintiffs in the case are Nolen “Scott” Ely and his family, and Ray Hubert and his family who live next to the Elys. The Ely family has lived in Dimock since the 1800’s.

“It’s been a battle,” said plaintiff Scott Ely. “I mean, you’re up against a multi multi multi million dollar company. We are the lucky ones in the case, but there are still many more families in the Dimock area who are still without the benefit of clean water.”

“This is a huge victory for Dimock families who have fighting for clean water for over six years. Finally justice has been served for Scott and Monica Ely, their three children, and their neighbors, the Huberts,” said Alex Lotorto, Shale Gas Program Coordinator for Energy Justice Network stated.

Cabot Oil & Gas states that they plan to appeal the ruling, but Lotorto said, “No matter the outcome, we have publicly disclosed all of the facts of the case for the world to see and the couples have beautiful children which is their greatest wealth.”

Except for a two year period when Cabot supplied these plaintiffs with water, since 2008, the Elys and Huberts have been living without reliable access to water and under rationing conditions. To survive day to day, these families haul water at their own expense every week for drinking, bathing and other daily basics.

Beginning in the fall of 2008, Dimock families noticed problems with their drinking water, and began to experience rashes, nausea, headaches and dizziness. A trigger point to the litigation was the explosion of Norma Fiorentino’s private water well on New Year’s Eve, December 31, 2008 due to methane gas accumulation in the well head.

The case eventually included 22 families from Dimock and Springville Townships in Susquehanna County, Pennsylvania, who sought fair compensation for damages to their property and their lives caused by Cabot’s failed natural gas drilling operations.

The travails of these plaintiffs, as well as those of other Dimock families, have been chronicled in the HBO documentaries, Gasland I and Gasland II.

Energy Justice Network, a nonprofit based in Philadelphia fiscally sponsored the legal fund for the case and have been working with the family since 2009. The website for the shale gas program is www.energyjusticesummer.org.

This jury award wasn’t even for all the damages. Back to the Desmog Blog story:

The Huberts and the Elys still live on Carter Road, hauling their water by truck — a chore that became far more cumberson in the winter when hoses often froze and water tanks must be heated, Scott Ely, a former Cabot subcontractor turned whistleblower, had testified.

The Ely family, which owns the land on which the Huberts reside, would receive $2.75 million and the Hubert family $1.49 million, one local television station is reporting. Because the lawsuit had been narrowed dramatically before trial, the plaintiffs were not permitted to pursue Cabot for any harms done to their health, but only for the damage to property and the personal nuisance that the water contamination had caused.

Why are no oil or gas executives in jail? Why are the perpetrating companies still in business? When those things happen, more justice will have been served.