That’s an oil pipeline, but the issues are the same for the Sabal Trail fracked “natural” gas methane pipeline. Private profit for companies in Houston, Texas and Juno Beach, Florida shouldn’t take local landowners’ property in Alabama, Georgia, and Florida.

“We’re thrilled, because the Supreme Court has finally ruled in favor of us — the little guys — and against a foreign oil giant,” Julia Trigg Crawford continued. “Basically, TransCanada said that it wanted a waiver from responding to our petition, and the Supreme Court said, “No, you must respond.”

Crawford says her case has broad implications, because if she wins, TransCanada and other foreign oil companies will no longer be able to use eminent domain to seize land for their private profit without direct proof their pipeline is carrying Texan oil. 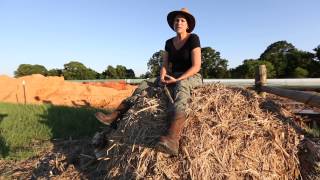 Once she jumped into the ring, she found she was fighting not just for herself, but for all American property owners and the planet too.

This is a project built to make money for an entity as they export a product to another country…. So we don’t believe it is the proper user of eminent domain.