Howdy, and it was good to meet you in Moultrie.

I look forward to the Federal Energy Regulatory Commission taking into account the whole big picture, and not just believing assertions by applicant companies without critical review.

Thanks for sending me this boilerplate, which I see appears in many FERC documents:

Any state or local permits issued with respect to the jurisdictional facilities authorized herein must be consistent with the conditions of this certificate. The Commission encourages cooperation between interstate pipelines and local authorities. However, this does not mean that state and local agencies, through application of state or local laws, may prohibit or unreasonably delay the construction of facilities approved by this Commission.

There was no source cited in the boilerplate, does it refer to this?

Schneidewind v. ANR Pipeline Company, 485 U.S. 293 (1988) [a U.S. Supreme Court case], and include the following proviso: “Any state or local permits issued with respect to the jurisdictional facilities authorized herein must be consistent with the conditions of this certificate. The Commission encourages cooperation between interstate pipelines and local authorities. However, this does not mean that state and local agencies, through application of state or local laws, may prohibit or unreasonably delay the construction of facilities approved by this Commission.” [Source: Order Denying Rehearing, Denying Requests for Stay, and Clarifying Prior Order, Sound Energy Solutions, Docket No. CP04-58-001, 107 FERC ¶ 61,623 at footnote 6 (June 9, 2004).]

You also omitted the oral rationale you gave for application of FERC’s quoted view of its own powers.

If I recall correctly, you said the Sabal Trail pipeline was for the benefit of the United States because Florida needs the energy from it and Florida is part of the U.S., so FERC can require a pipeline to be run through Georgia, even if the pipeline is of no direct advantage to Georgia. You called this “the big picture”.

Yet Florida actually does not have enough households to use the amount of energy such a pipeline would produce, as Sandra Y. Jones pointed out in a FERC comment that earlier you said you had not yet had time to adequately review.

It’s mysterious to me why FERC should simply believe an applicant company’s assertion that a state needs that much power, without requiring solid evidence and taking into account critical review by independent parties.

It seems to me that evidence and opinions presented by directly affected landowners, who are, after all, the subjects of the takings Spectra proposes and that you quoted the above text to support, should be taken into consideration as speedily and with at least as much weight as opinions of companies that would financially benefit from those takings.

And even if Florida did need that much power, natural gas is no longer the most cost-effective way to supply it.

Just last month a judge in Minnesota ruled that solar power is a better deal for ratepayers than natural gas:

OAH 8-2500-30760 MPUC Docket No. E-002 / CN-12-1240
STATE OF MINNESOTA, OFFICE OF ADMINISTRATIVE HEARINGS,
FOR THE PUBLIC UTILITIES COMMISSION
In the Matter of the Petition of Northern States
Power Company to Initiate a Competitive
Resource Acquisition Process
FINDINGS OF FACT, CONCLUSIONS OF LAW AND RECOMMENDATION

Add to that wind power off the Atlantic coasts of Georgia and Florida, and Florida could probably shut down more coal plants without any need for any new pipeline.

Further, when several local landowners and others pointed out to you that the gas for the pipeline would come from fracking, which destroys land, water tables, and aquifers, you said that was not part of FERC’s review, which was only about transportation of natural gas.

Spectra Energy is not so reluctant to include fracking in its big picture. In this map that I photographed at a Sabal Trail pipeline meeting in Moultrie 15 October 2013, Spectra brags about “Our Portolio of Assets”, and clearly marks “Shale gas formations” including the Marcellus Shale in Pennsylvania and the Barnett Shale in Texas. 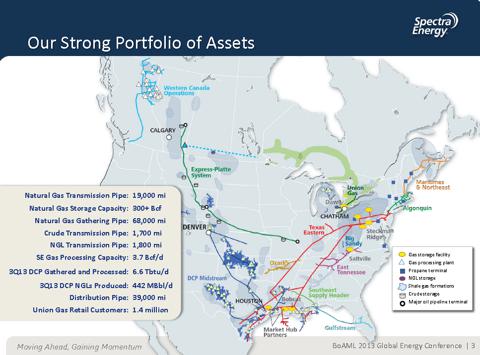 Here’s a version of that map on SeekingAlpha last week labelled “Our Strong Portfolio of Assets”:

A version of this map appears in Spectra’s Form 10-K filed with the SEC for the fiscal year ended December 31, 2011, which says in part:

“Future earnings growth will be dependent on the success of expansion plans in both the market and supply areas of the pipeline network, which includes, among other things, shale gas exploration and development areas, the ability to continue renewing service contracts and continued regulatory stability.”

The whole point of Spectra’s pipelines is to transport gas, and most of that gas these days comes from fracking.

Fracking directly destroys parts of the United States and indirectly adversely affects all of the U.S. and the world through methane leaks from wells and pipelines.

According to the Associated Press, at least four states have found faracking contaminates well water.

“In at least four states that have nurtured the nation’s energy boom, hundreds of complaints have been made about well-water contamination from oil or gas drilling, and pollution was confirmed in a number of them, according to a review that casts doubt on industry suggestions that such problems rarely happen.”

As you no doubt know, methane is a much more potent greenhouse gas than carbon dioxide, with concomittant effects on climate change. In the southeast, climate change is already causing droughts with related insect and heat damage and fatalities in our economically essential forests, plus floods with property damage and increased prevention expense. It has also moved growing zones northwards; see, for example,

How is it to the benefit of the United States to further damage the climate of the whole country, while damaging watersheds in fracking regions and taking lands in the southeast for a pipeline Florida does not need, when solar power is more cost-effective?

This is without even getting into Spectra’s own long and continuing record of corrosion, leaks, and equipment failure, which will have to be the subject of another message. 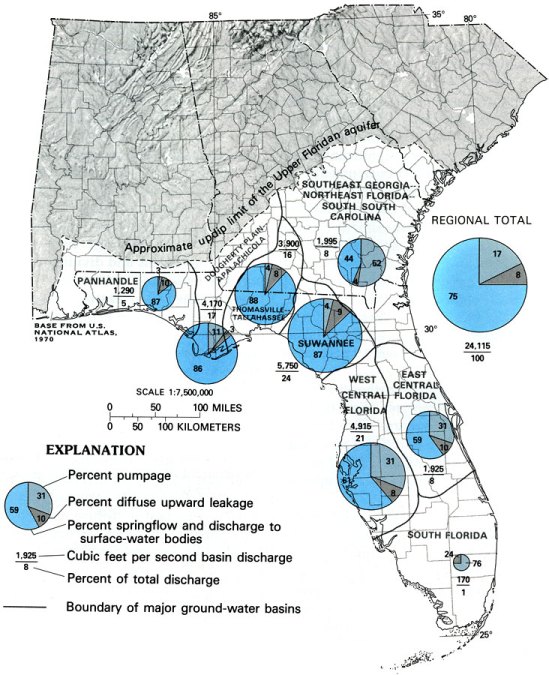 Solar has always been far safer than gas environmentally (uses no water; emits no pollutants), with much much less property damage and far fewer injuries and fatalities than methane.

Thank you for offering to accept further information, especially towards (3). This message is a first installment of such information.

Attempts to file this through FERC’s e-comment or e-filing so far get this error message every time:

A temporary technical issue has occurred. Please retry your transaction in ten minutes. Should it again fail, please contact FERCOnLineSupport@ferc.gov (866-208-3676); we will work to resolve the problem as soon as possible.

I have sent a query to that address.

9 thoughts on “The Big Picture”