Alan Mauldin wrote for the Moultrie Observer 10 February 2014, Sabal Trail: County can have input, but feds are in control, County officials can’t decide which route a massive gas pipeline takes through the area or prevent its construction, but it can have an impact on safety, Colquitt County officials heard Monday.

Federal law trumps those of the state and county ordinances, so if federal officials grant a permit for a pipeline route there is little to be gained from opposing it, County Attorney Lester Castellow said.

10. Those general propositions aside, we cannot, at this stage of the proceeding, state with certainty what local requirements may be included in, or precluded by, our future orders. Under the settlement agreement, PacifiCorp proposed, under certain conditions, to comply with state and local ordinances, and the Counties have noted particular local ordinances which they maintain should apply.10 To determine in a declaratory order which, if any, local requirements we will or will not require the licensee to fulfill would be to prejudge issues that may come before us in the future. Therefore, to the degree that PacifiCorp is seeking assurance that the Commission’s order will not require compliance with any of the Counties’ ordinances, we cannot do so here.

So according to FERC, if a local government opposes or attempts to regulate a pipeline, FERC can choose to let that stand. If a county does nothing, FERC has nothing to decide.

Back to the Moultrie Observer:

The county also cannot impact the project through either safety or zoning ordinances, which would almost invariably be voided if the county is taken to court.

South Buffalo, Pennsylvania had a different opinion on zoning, and even if the county did lose in court, it would still cost the pipeline company time and money; maybe enough to make it not worth their while. And sure, a court struck down another Pennsylvania town’s denial of a compressor station. But that was after Dominion had a permit from FERC. Now is the time to object: before FERC even gets into its permitting process. 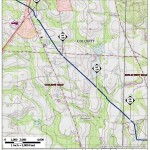 That doesn’t mean that the county has no role to play, Castellow added, and the more involved county officials are in the process the more local concerns are likely to be addressed.

“The regulations in place now give us the opportunity to give input, and that’s what we need to do,” said Castellow, who gave Colquitt County Commission a report during a Monday afternoon work session on the research he has done over the last month.

As the biggest agricultural-production county in the state, Colquitt County has specific concerns related to that industry, specifically interfering with irrigation pipes, he said. The county’s Roads and Bridges Department also has an interest in making sure a natural gas pipeline is buried deep enough at points where it crosses under roads and drainage ditches. So for locations where farms and roads are in the pipeline equation, making sure it is buried deep enough is important.

The Federal Energy Commission, which must approve the route, is scheduled to hold scoping hearings in early March, which will be the county’s first opportunity to address local concerns.

Wrong. The county could have been filing comments with FERC for months.

“There’s going to be an opportunity, and if you don’t take advantage you lose it.”

When will local governments stop making excuses and stand up for their citizens?

The commission plans to appoint a committee made up of commissioners, county safety officials, farmers and perhaps other members of the public who oppose the pipeline, to make recommendations and monitor the process.

“We may not be able to stop this, but we have the opportunity to make this as safe as we can for all of our citizens,” Commissioner Ray Saunders said.

That would be a start, as Gilchrist County, Florida has already demonstrated.

1 thought on “Colquitt County attorney gives up too easily”