A reporter for a major newspaper is calling Spectra on its safety record, and calling Spectra’s responses “not good enough”! After thirty years of Spectra safety promises, that’s putting it mildly. A Maine resident put it this way after the Spectra’s Searsmont compressor blowout: “we were clearly lied to”. Spectra Energy Corp. along with FPL’s parent, NextEra Energy, would bury the 473-mile Sabal Trail pipeline expected to carry 1 billion cubic feet per day of natural gas to just south of Orlando in Osceola County, where it would connect to another line for eventual delivery to FPL in Martin County.

Spectra’s safety record, however, leaves something to be desired.

Take, for example, the company’s Texas Eastern pipeline, a 9,200-mile Spectra project connecting Texas with the markets in the Northeast.

$8.6 million in property damage, according to the Pipeline and Hazardous Materials Safety Administration. EcoRI.org, a nonprofit investigative journalism website, reported that the agency cited the company 14 times since 2006, and six citations involved Spectra’s failure to control pipeline corrosion. Texas Eastern paid more than $4 million in fines in connection with those violations.

Sloppy maintenance combined with volatile methane, the main ingredient in the natural gas. Can that be a good idea? Just ask residents of Harlem, N.Y., where natural gas from leaky old pipes exploded two weeks ago, killing eight people and leveling two buildings.

Ritchie got more detail got Spectra’s Andrea Grover to admit she did maybe know something about Spectra’s sorry safety record, unlike in Lowndes County, GA in December 2013 or in Gilchrist County, FL in February 2014.

Andrea Grover, director of stakeholder outreach for Spectra, said, “No incident is acceptable.” The company’s goal, she wrote in an email, is zero incidents. She said the company has a “strong safety record” and that its incident rate for onshore piplines is “half that of the industry as a whole.”

So Spectra does have an incident rate! Finally!

Plans call for the pipe welds for the Sabal Trail project to be ultrasonically or X-ray inspected, Grover said. Additionally, the entire pipeline, including compressor stations and meter stations, would be tested at pressures “significantly higher” than the maximum allowable operating pressure, she said.

Well, that would be refreshing, because one of Spectra’s own employees blew them in to PHMSA for never bothering to check for corrosion, contributing to that five-item Final Order from PHMSA to Spectra CEO Greg Ebel in December 2013.

Grover said, “We conveyed to the Bangor Daily reporter that once we had determined the specific facts that we would convey those details in the local Town Hall meeting with the public officials and residents.”

That’s not good enough. The situation on the ground near Bangor was terriying and chaotic.

“The guy that answered the phone was clearly confused and a little bit panicked,” she told the newspaper. “I said ‘Are we safe?’ And he said, ‘I can’t tell you that.'”

We were clearly lied to.

In 2007, when you guys were seizing our land for this thing, we were told by the people then and subsequently ones here 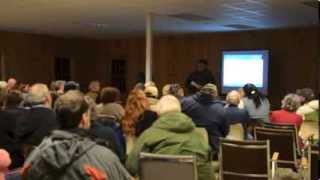 that it would be manned 24 hours a day. That’s what we were told. We want to know why we were clearly lied to.

And secondly… what would make us.. think that you are telling us the truth now.

Why would we believe a corporation that lied to us then?

The Spectra rep in Maine fell back on the standard Spectra excuse of he wasn’t familiar with that.

Spectra has been promising tests and monitoring for about thirty years now, after each of these:

How can we believe Spectra has learned anything from their previous incidents when they don’t even acknowledge many of them happened?

Why should we believe Spectra now?

The FERC Scoping Meetings get to Ritchie’s area next week. This week they’re in south Florida: Lake Wales last night, Okeechobee tonight, and Kissimmee tomorrow. You can stand up and speak, or send in ecomments.