Where is FLiNG Energy and its “partners in Indiantown” that it expects to help it quadruple its LNG capacity in the first quarter of 2016? All along FPL’s pipeline to the sea, and PCBs, too. So convenient for LNG export from the proposed Sabal Trail fracked methane pipeline!

Martin County Property Appraiser says that lot is owned by Seaglades Investment Co., which sounds like a random real estate speculation company. Not a very imposing office for a company that has such large LNG export plans.

OK, what about FLiNG’s most likely partner in Indiantown, the Floridian LNG storage facility?

Floridian LNG gives no clue, listing only a contact address in Houston, Texas.

But there actually is a place that matches that tiny mockup image, with the same little ponds, the main road in front, and that curving road in the corner is a railroad siding: 18300 SW Warfield Blvd, Indiantown, FL, shown below via google earth, and currently owned by Florida Steel Corporation, PO BOX 31328 TAMPA FL 33631, according to the Martin County, FL Property Appraiser. 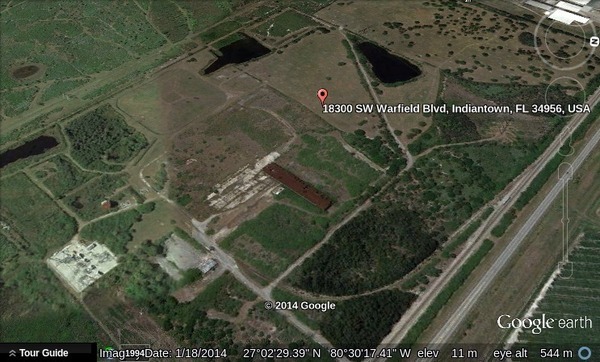 According to FL Dept. of Environmental Protection, Waste Management:

The Florida Steel Company site is a 150 acre facility located on SR 710 approximately 35 miles northwest of West Palm Beach in Section 35, Township 39S, Range 38E at 27Â° 02 ² 21.5990 ³ N, 80Â° 30 ² 23.6600 ³ W. The facility has been inactive since 1982. When active, the facility operated an electric furnace process to recycle steel scrap into steel reinforcing bars used in construction. Originally, the facility disposed of emission control (EC) dust by dumping it on the ground. It is estimated that over 75,000 tons of contaminated dust were dumped in these waste piles. In 1980, Florida Steel changed this disposal practice, and EC dust was collected and transferred to a chemical plant in South Carolina for recovery of lead and zinc.

A review of the operations at Florida Steel indicates that fluids containing polychlorinated biphenyls (PCBs) were probably used during the early 1970s in the casting process, and in some of the hydraulic systems. Florida Steel believes the PCBs were combined with the oily materials collected in the recirculating reservoir. The reservoir was designed to contain and treat the water used in the steel-making process….

A portion of the site is being considered for redevelopment by the Floridan Natural Gas Storage Company, LLC (FGS). The plans for redevelopment include the installation of one to two natural gas storage tanks and distribution facility. In July 2007, FGS applied for the environmental resource permit (ERP) necessary for the site redevelopment. FSG is currently working with appropriate agencies to obtain the ERP and other necessary permits.

Well, maybe those PCB-contaminated ponds are why Floridian LNG doesn’t identify the location on its website that brags about “SAFE CLEAN RELIABLE”. The irony of it also saying:

Yet Floridian LNG never mentions that PCB-contaminated site nor that methane is a far worse greenhouse gas, nor that it leaks. At least it’s honest about that “and elsewhere”, as in LNG exports.

That FPL power plant is in the west of the county, near the shores of Lake Okeechobee at 21900 SW Warfield Blvd. 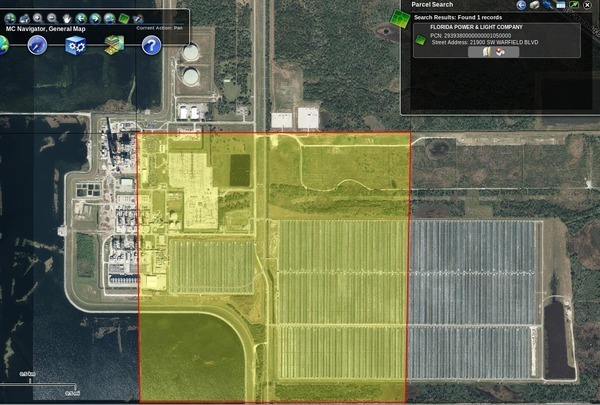 What connects all three locations? Well, SW Warfield Blvd, with the power plant at 21900 (A), the Floridian LNG site at 18300 (B) about 7 miles away, and the FLiNG storefront at 15328 (C) about another 4 miles towards the sea on this google map:

And look what conveniently runs right along that SW Warwick Ave. aka FL 710: FPL’s own pipeline to the sea from its power plant to Riviera Beach. 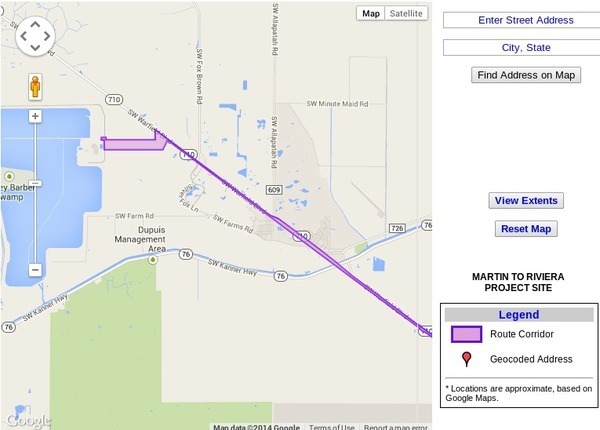 As Floridian LNG says on its front page:

Both of Florida’s natural gas supply pipelines from the Gulf Coast are nearby, allowing the gas to be delivered directly from the pipelines into storage during low-demand periods and redelivered to capacity holders when it is needed.

1 thought on “Where are Floridian LNG and FLiNG Energy?”