So whose line was it? Craig Hlavaty and Mike Glenn wrote for the Houston Chronicle 26 June 2014, Updated June 27, 2014 12:29am, Gas line ruptures in Wharton County, injuring one,

The line is owned by Enterprise Products, a Houston-based gas and crude oil pipeline company.

And look who they partner with, according to Enterprise Products’ Corporate Profile, Competitive Strengths,

We have long-term relationships with many of our suppliers and customers, and we believe that we will continue to benefit from these relationships. We jointly own facilities with many of our customers who either provide raw materials to, or consume the end products from our facilities. These joint venture partners include major oil, natural gas and petrochemical companies, including BP, Chevron, ConocoPhillips, Dow Chemical, ExxonMobil, Marathon, Shell and Spectra Energy.

And look what they want to do, just like Spectra:

Larry Smith wrote for SeekingAlpha 6 January 2013, The U.S. May Lead LNG Exports: Who Will Be The Winners? 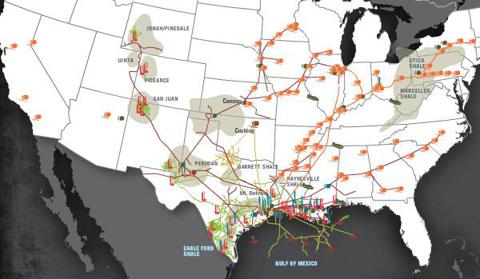 As you can see, EPD has an enormous amount of infrastructure along the Gulf, and as such, will benefit from LNG exporting. With their various pipelines and cracking units, etc. surrounding the Gulf, it is hard to believe EPD will not be a winner when LNG exports begin in earnest.

Well, not just like, because Enterprise Products actually operates LNG export terminals, according to their own NGL Import/Export Facilities, while Spectra merely builds pipelines that lead to them.

Back to the Chronicle:

“The line has been isolated and the situation is under control,” said Enterprise Products spokesman Rick Rainey. “There is no longer any gas feeding into that line.”

The natural gas that remained in the line was allowed to burn off, officials said. Rainey said the rupture occurred on a “gathering line” — a smaller pipeline that moves the natural gas from the wells to the processing facilities.

“It’s not a transmission line — the big diameter pipelines that move natural gas across the country,” Rainey said.

Rainey said the cause of the gas line break remains under investigation.

That’s US Highway 59, so maybe we’ll see a report from the National Transportation Safety Board (NTSB) that actually identifies the cause. Leave it to PHMSA defined by the American Petroleum Institute or, worse, fossil-fuel-funded FERC, and we’ll never know.

There was some damage to the roadway and a nearby home, but those issues are being tended do, Wharton County emergency management coordinator Andy Kirkland said.

Wharton County officials said there was no need to order an evacuation for the nearby East Bernard community.

Presumably because there were no other pipelines next to that one, unlike the 10-inch pipeline explosion that evacuated Milford, Texas in November 2013. That one, too, was much smaller than the 36-inch proposed Sabal Trail fracked methane pipeline.