Before the story, here’s the governor’s whole statement:

“Neuberger Berman, and therefore Spectra, became an investment after the Governor’s blind trust was created in 2011. Therefore, he had no knowledge of the investment because the decision to invest was made by a trustee of the blind trust. Immediately upon disclosing his assets to the public, Governor Scott placed all of his assets back into a blind trust to ensure that there would not be the possibility of any conflict of interest. As a result, Governor Scott has no knowledge of the current contents of the blind trust. Governor Scott went above and beyond to provide Floridians with transparency by disclosing his assets and releasing tax returns for both himself and the First Lady. Charlie Crist is still refusing to follow suit by releasing his wife’s tax returns, which only makes us wonder what he’s hiding.”

You know the governor is feeling the heat when the best he can do is to try to say his opponent does it, too.

The Florida governor has been questioned about his investment in a natural gas company and his aide’s involvement in a rail project.

A few months ago, I wrote about an epidemic of fake Republican scandals that Democrats were hyping for 2014, starting with a nothingburger of a whatever-gate involving Florida Governor Rick Scott. My point was that political scandals rarely get traction, and shouldnâ€™t get traction, without a semi-plausible link to significant public policies. Let me put it a different way: Damaging scandals look more like the two latest messes involving Governor Scott.

The first involves Scottâ€™s support for a controversial Miami-to-Orlando rail project known as All Aboard Florida, when the company pushing it had financial ties to his chief of staff. The second involves Scottâ€™s support for a controversial natural gas pipeline to North Florida, when he owned a stake in the company building it. You probably havenâ€™t heard about these messes, because theyâ€™re pretty obscure. Theyâ€™re also mini-messes, especially for Scott, who was once CEO of a hospital chain that paid a record $1.7 billion fine for fraud committed on his watch.

What could turn these messes into scandals is their potential link to public policiesâ€”in particular, to lame and unpopular policies that could look even worse if Scottâ€™s probable opponent, Republican-turned-Independent-turned-Democrat Charlie Crist, can frame them as corrupt policies.

And that framing has started. Florida Democratic Party wrote 23 July 2014, Rick Scott Must Divest From Gas Pipeline Project He Approved,

As Broward Bulldog, WFTV, and Time have reported, Rick Scott’s financial stake in the gas pipeline project he approved raises serious concerns about his conflict of interest. While the governor insists he approved the pipeline without knowledge of the contents of his blind trust, it has now become clear that he he stands to make a profit from the construction of the pipeline.

To avoid the clearly blatant conflict of interest, the governor must divest himself of all interests in the Sable Trail Pipeline immediately. 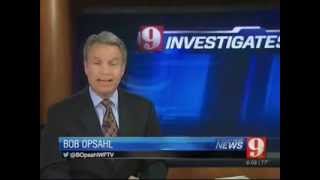 “It’s been clear for years that Rick Scott’s blind trust is anything but blind — it’s an excuse to keep Floridians in the dark,” said Florida Democratic Party Chair Allison Tant. “While transparent and ethically sound decisions may seem like a foreign concept to Rick Scott, the people of Florida expect their leaders to do the right thing and avoid blatant conflict of interest. Floridians of all political leanings can agree that public officials should not get richer because of the projects they approve.”

And FL Dems YouTubed this WFTV report of 23 July 2014, WFTV: Rick Scott Will Profit Off Gas Pipeline He Approved,

Steve Benen, the producer of The Rachel Maddow Show, wrote for The MaddowBlog of msnbc 23 July 2014, Floridaâ€™s Scott finds himself in hot water,

Issue #2 came up yesterday, when Scott was accused of personally profiting from a gas pipeline he supported.

Upon his election in 2010, Gov. Rick Scott’s transition team included a Florida Power & Light executive who pitched his company’s plan to build a major natural gas pipeline in North Florida to fuel a new generation of gas-fired power plants in places like Port Everglades. […]

In May and June 2013, he signed into law two bills designed to speed up permitting for what came to be known as the Sabal Trail Transmission — a controversial, 474-mile natural gas pipeline that’s to run from Alabama and Georgia to a hub in Central Florida, south of Orlando.

What wasn’t known at the time is that Scott owned a stake in Spectra Energy, which was chosen to build and operate the $3 billion pipeline. The governor’s team insists the investment was made through a blind trust, though there are unanswered questions about when the shares were acquired and just how blind that trust really is.

A 474-mile natural gas pipeline could run from Alabama through Georgia and into Florida as early as 2017, and Florida Gov. Rick Scott owned stock in the company that’s set to build it.

The story includes the Beth Gordon quote from the Miami Herald. And it digs deeper, citing Greenlaw’s filing with GA EPD about the Albany, GA compressor station. and EPA’s questions to FERC (via a Gainesville.com article. It even digs into an interview by Janelle Irwin for WMNF radio 19 May 2014, Proposed gas pipeline could threaten Tampa Bay water supply, quoting me:

“I’ve never heard of a set of solar panels catching fire and burning or blowing up and throwing a pipe across a highway or in any other way endangering people,” he said.

Seems like whoever gets quoted is called “the founder” of SpectraBusters, although there are actually many founders. Nevermind that: we don’t need a corrupt, dangerous, dirty fracked methane pipeline. Solar power for the Sunshine State, the southeast, the U.S., and the world!

Florida for All is holding a press conference 11AM this morning at the Orange County Courthouse, Orlando, Florida 32801:

For the second time this year, it has been uncovered that Rick Scott has a stake in a company with hazardous environmental plans in Florida. A recent investigation revealed that Scott had a $53,000 stake in Spectra, the company set to build a dangerous pipeline that runs from southern Georgia to south of Orlando.

Last month it was reported that Scott had a $135,000 stake in Schlumberger Ltd, a firm with ties to acid fracking near the Everglades and fresh water aquifers in Collier County.

With Florida ranked in the top ten most polluted states, protestors will demand that Rick Scott expand renewable energy, which creates jobs, rather than allow his corporate friends to destroy Florida’s water and air for a quick profit.