Charlotte-based Piedmont owns a 24 percent stake in the new Constitution pipeline, now under review by the Federal Energy Regulatory Commission, that will run from northern Pennsylvania’s Marcellus Shale drilling region to northeastern markets.

Florida Power & Light last year chose proposals by Spectra Energy and NextEra Energy to expand gas capacity in that state. A pipeline will run from southwestern Alabama to south Florida by 2017.

All the pipelines seem to be pushed using the same scripts.

Back to the NV Daily article:

That corridor cuts through thousands of acres of agricultural and forestal land, conservation easements and historic areas in Warren County alone. The corridor also goes through the magisterial districts represented by Supervisors Richard Traczyk and Tony Carter and Chairman Daniel Murray Jr.

The article notes that Spectra had already decided to “suspend” its activity about that pipeline. Maybe Spectra listened to Rappahannock County, VA’s resolution of 7 July 2014 that basically told Spectra to go away and never come back.

Supervisors adopted a resolution Tuesday that reflects the board’s opposition to the pipeline project. The board urged Duke Energy to pick a different corridor to satisfy its energy needs. However, should the project be deemed necessary and go forward, the board requests that the construction be done in the least intrusive manner to minimalize the impacts.

County Administrator Douglas Stanley advised the board that some residents received requests from Spectra representatives to go on their property. The county has received similar requests.

Warren County would have little to no power to stop a pipeline, Stanley said.

“I thought at least if we’re going to make a statement, let’s make it early enough that the people who make these decisions will know how the leadership of Warren County feels,” Stanley said.

Jefferson County, FL in September 2011 passed a land-use ordinance to prohibit any company from sucking up water to bottle for sale elsewhere, thus prohibiting Nestlé or any other company from doing that.

I am not a lawyer, but the Pennsylvania Supreme Court Justices are, and one can assume Jefferson Couty, FL hired an attorney.

Joe Farruggia wrote for The Warren Sentinel some time in early August 2014, Warren County Supervisors adopt resolution opposing proposed natural gas pipeline, that Duke Energy is “Spectra’s parent company”, which is confused. Duke issued the RFP and Spectra responded to it. Nevermind the convoluted history of Texas Eastern and Duke and Spectra. While NextEra Energy is FPL’s parent company, in the usual sense that NextEra owns FPL, such is not the case with Duke and Spectra.

In the Warren Sentinel story:

[Warren County Administrator Doug] Stanley said the only possible benefit for Warren County would be in the form of personal property business taxes and lodging and meals taxes generated by construction workers during the construction period, “but that won’t be much of a tradeoff.” 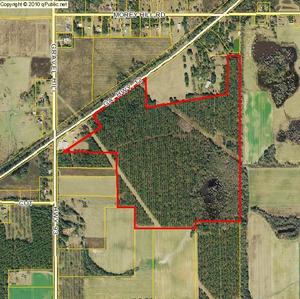 In response to a question from South River Supervisor Linda Glavis about environmental impacts, Stanley noted that the proposed route of the pipeline will take it across the Shenandoah River and through land that is zoned agricultural.

“Many of the property owners who will be affected already have multiple easements and rights-of-way running through their properties for power lines, gas lines, water lines and roads,” Stanley added.

And that last is exactly the situtation of the Georgia landowners who countersued Spectra in Leesburg, GA 10 July 2014: with a pipeline and a power line already there, Spectra proposes a hundred-foot gash for a 36-inch fracked methane pipeline.

Probably time for some more landowners to suit up and hire lawyers.

Text of the Warren County Resolution

From the Warren County Board of Supervisors Minutes of 5 August 2014, here’s their actual resolution:

WHEREAS Duke Energy has issued a Request for Proposals (RFP) to construct a natural gas transmission line connecting resources in western Pennsylvania to its facilities in North Carolina, and

WHEREAS Spectra Energy, a firm responding to the RFP, proposes a corridor through Warren County, and

WHEREAS the Warren County Board of Supervisors believes that this project must receive a comprehensive review under all applicable state and federal regulations and requirements with special attention to reviewing environmental and public health impacts, and

WHEREAS in Warren County alone, that corridor includes 22 miles of Appalachian Trail, 15 miles of scenic byways, 1 historic district, 2 historic sites, 9,424 acres in the Rockland Agricultural and Forestal District, and

WHEREAS the Comprehensive Plans of each of the affected counties, including Warren, call for the preservation of land of historic, scenic, and cultural importance, and the Warren County Board of Supervisors and its constituents have concerns relative to the impact of this proposal on Warren County, and

WHEREAS the County of Warren depends upon its natural, unspoiled beauty for its agricultural base and for the tourism it generates, which together sustain a measurable portion of our local economy.

NOW, THEREFORE, BE IT RESOLVED, that the Warren County Board of Supervisors urges Duke Energy to select another proposed corridor for its energy needs rather than that proposed by Spectra Energy, and

BE IT FURTHER RESOLVED that the Warren County Board of Supervisors opposes any plan that proposes an alignment in Warren County that would harm the lives and livelihoods of its citizens, and