One month before Spectra “suspended” its Pennsylvania to Carolina pipeline plans, a Virginia county passed a resolution saying it didn’t want it. Not just please don’t cross our river like Hamilton County, Florida. Don’t come through here at all, said Rappahannock County, Virginia.

A resolution titled “Rappahannock County Opposition To The Construction of An Underground Natural Gas Transmission LIne within Its Jurisdiction,” was passed by the Rappahannock Board of Supervisors on July 7, 2014. The resolution urges Duke Energy to select another proposed corridor for its energy needs. 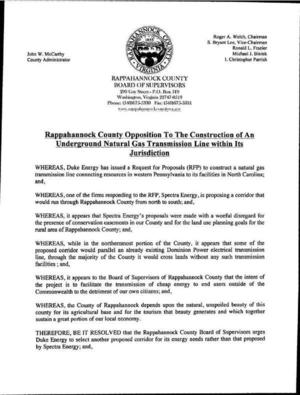 WHEREAS. Duke Energy has issued it Request for Proposals (RFP) to construct a natural gas transmission iiri: connecting resources in western Pennsylvania to its facilities in North Carolina; and;

WHEREAS. one of the ﬁrms responding to the RFP, Spectra Energy, is proposing a oonidor that would run through Rappahannock County from north to south; and,

WHEREAS, it appears that Spectra Energy’s proposals were made with a woeful disregard for the presence of conservation easements in our County and for the land use planning goals for the rural area of Rappahannock County; and,

WHEREAS, while in the northernmost portion of the County, it appears that some of the proposed corridor would parallel an already existing Dominion Power electrical transmission line, through the majority of the County it would cross lands without any such transmission facilities; and,

WHEREAS, it appears to the Board of Supervisors of Rappahannock County that the intent of the project is to facilitate the transmission of cheap energy to end users outside of the Commonwealth to the detriment of our own citizens; and,

WHEREAS, the County of Rappahannock depends upon the natural, unspoiled beauty of this county for its agricultural base and for the tourism that beauty generates and which together sustain a great poﬂion of our local economy, 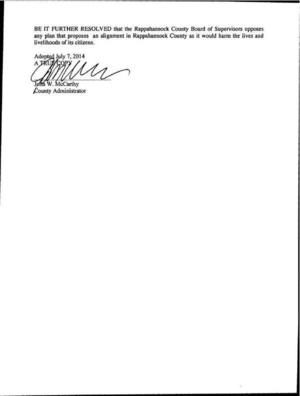 THEREFORE, BE IT RESOLVED that the Rappahannock County Board of Supervisors urges Duke Energy to seleet another proposed corridor for its energy needs rather than thill proposed by Spectra Energy: and,