Agritourism, economy, and environment were among the reasons Terrell County followed Dougherty County and passed a resolution against the Sabal Trail pipeline. FERC didn’t post the County Chairman’s cover letter, but the County Clerk sent it to me. What else has FERC neglected to post?

Filed with FERC 13 November 2014, Protest of Terrell County Board of Commissioners (Georgia) under PF14-1.

WHEREAS, Spectra Energy of Houston, Texas has proposed building a $3.7 Billion, 460-mile gas pipeline from Central Alabama to Central Florida known as the Sabal Trail, and:

WHEREAS, a growing contingency of local and area residents have expressed opposition to construction of the pipeline and compressor stations used to force the natural gas through the pipelines, and:

WHEREAS, The construction of the pipeline through Terrell County, Georgia will severely impact agricultural and agiitourism businesses located in the county, and:

WHEREAS, it is clear to this board that the Sabal Trail will not service any of the needs of the residents of Terrell County, Georgia or any residents of Georgia, and:

WHEREAS, This Board has concerns that the county will suffer potential environmental and safety consequences as a result of the construction of said pipeline;

WHEREFORE IT IS RESOLVED by the Board of Commissioners of Terrell County, Georgia as follows:

When I called Terrell County Clerk Beth Parnacott today, she replied with the full submission, which includes 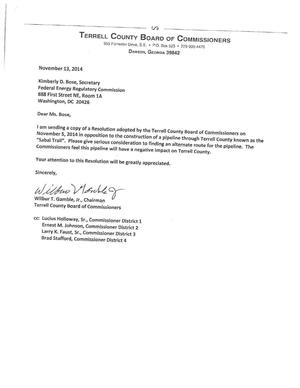 this cover letter by Chairman Wilbur T. Gamble, Jr. FERC didn’t include the cover letter in the filing visible to the public.

That’s the third omission by FERC recently, after they lost the second page of Dougherty County’s resolution and misplaced the lack of need, false pretense, and duress page of Bill Kendall’s letter. Maybe this last omission wasn’t substantive, but those other two certainly were.

What else is FERC inadvertently not posting for the public to see in their ecomment system?

Meanwhile, other county commissions can do what Dougherty and Terrell have done: pass a resolution against the pipeline. Or, even better, pass a binding land-use ordinance.

And you can ecomment to FERC or contact your local, state, or national elected officials and the news media and your neighbors and express your opposition to the Sabal Trail pipeline.