Disturbance of soil, exacerbating corrosion, needless risk through unnecessary crossings, and cutting corners through inappropriate boring methods: when even another pipeline company calls you out for those things, you’ve got a problem, Sabal Trail. And Southern Natural Gas just did that in ecomments to FERC.

SONAT should be worried about this after last week in Berrien County, Georgia:

A humble county ditch puller broke SONAT’s pipeline on Bradford Road, resulting in Sheriff’s deputies from two counties, a city 911 vehicle, and an ambulance being scrambled, in addition to a fleet of Kinder Morgan vehicles. And me, since this break was only a few miles from my house, and the valve they used to turn off Berrien County is on my property. Neighbors I’ve known all my life were evacuated. One spark and they wouldn’t have had anything to come back to. And this was a 9 or 10-inch pipeline at 800PSI. Sabal Trail wants to run a 36-inch pipeline at twice the pressure, more than 20 times the gas. Why should any of us accept that risk for Sabal Trail’s corner-cutting profit?

You should have seen the face the Kinder Morgan rep on the spot pulled when I mentioned Sabal Trail. Now we can see spelled out what SONAT really thinks about their competitor, including: 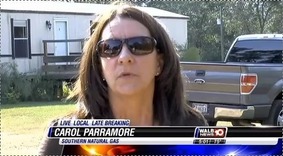 Moreover, disturbing the soil around, and under, the SNG pipeline during construction of each crossing creates the additional possibility that the soil around the pipeline could become de-stabilized, which could then cause undue stresses on the pipeline, potentially resulting in a failure of the pipeline at some future date.

Can FERC or Sabal Trail deny SONAT has experience in these issues? Maybe they’ll listen, more than they have to FL-DEP, SRWMD, WWALS, GWC, and everybody else who has been telling them this same thing?

On October 15, 2014, the Federal Energy Regulatory Comlnission (Commission) issued its Supplemental Notice of Intent (NOI) To Prepare an Environmental IInpact Statement (EIS) for the Planned Southeast Market Pipelines Project in the abovereferenced proceeding. To assist in the scoping process for this project, Southern Natural Gas Company, L.L.C. hereby submits its comments to the Commission.

The Southeast Market Pipelines Project involves the construction and operation of over 650 miles of interstate natural gas pipeline and associated facilities in Alabama, Georgia, and Florida. The portion of the Project involving Sabal Trail Transmission, LLC (Sabal Trail) includes the construction and operation of approximately 460 miles of 36-inch diameter natural gas transmission pipeline beginning in Tallapoosa County, Alabama and ending in Osceola County, Florida. Southern Natural Gas Company, L.L.C. (SNG) operates and maintains an interstate natural gas pipeline system that is also located in the States of Alabama, Georgia, and Florida. SNG was recently advised by Sabal Trail of its plans regarding the layout and construction of its pipeline project alongside SNG’s pipelines and rights-of-way for a distance of approximately 180 miles. As the Sabal Trail portion of the Southeast Market Pipelines Project will directly affect the continued safe operation of SNG’s pipeline facilities, SNG hereby submits the following comments in this proceeding.

Sabal Trail has currently proposed approximately 90 crossings of SNG’s pipelines over approximately 180 miles where the Sabal Trail pipeline runs parallel to SNG’s pipelines. This number of crossings is extraordinary and in most instances unnecessary. SNG understands the public policy benefits that can be associated with thoughtful colocation of energy infrastructure. However, it must be constructed and operated in a manner consistent with best practices for the quiet and safe operation of the incumbent infrastructure; in this case, the SNG pipelines. SNG understands that pipeline crossings are a common occurrence and that when pipelines are running in different directions some number of pipeline crossings cannot be avoided, but in this case the Sabal Trail pipeline will run parallel to the SNG pipeline, so most of the proposed crossings can be avoided.

corrosion. Pipeline crossings, particularly when the pipelines are running in parallel, complicate routine operation and maintenance activities such as line locating, leak surveying, and management of encroachments. This is because the orientation of the pipelines changes from location to location, making it more difficult to manage those activities. Thus, crossings should be avoided where possible in order not to create unnecessary additional risk.

SNG has met with Sabal Trail and begun discussions regarding these crossings. SNG will continue working with Sabal Trail to develop appropriate colocation, construction, and operating plans; however, such plans must be reasonable with the understanding that such plans may necessitate route and construction adjustments that may have environmental and landowner consequences. At this point, SNG is filing these comments to alert the Commission, and other stakeholders, to these issues so that they can take them into consideration at the earliest possible time in the certification process for Sabal Trail. Please be advised that SNG will participate as needed in the Commission’s proceedings in this matter to protect the safe and efficient operation of SNG’s pipeline facilities.