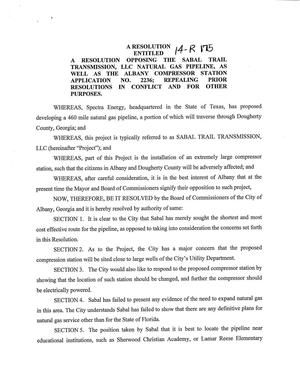 WHEREAS, afier careful consideration, it is in the best interest of Albany that at the present time the Mayor and Board of Commissioners signify their opposition to such project,

NOW, THEREFORE, BE IT RESOLVED by the Board of Commissioners of the City of Albany, Georgia and it is hereby resolved by authority of same:

SECTION 1. It is clear to the City that Sabal has merely sought the shortest and most cost effective route for the pipeline, as opposed to taking into consideration the concerns set forth in this Resolution.

SECTION 2. As to the Project, the City has a major concern that the proposed compression station will be sited close to large wells of the City’s Utility Department.

SECTION 3. The City would also like to respond to the proposed compressor station by showing that the location of such station should be changed, and further the compressor should be electrically powered,

SECTION 5. The position taken by Sabal that it is best to locate the pipeline near educational institutions, such as Sherwood Christian Academy, or Lamar Reese Elementary School and Martin Luther King, Jr. Elementary School, makes no sense. Further, the land area subject to Sabal’s proposed plan can best be described as one of solitude containing schools and single family homes. 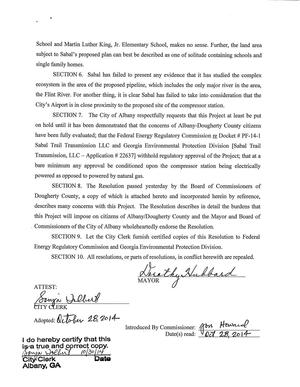 SECTION 7. The City of Albany respectfully requests that this Project at least be put on hold until it has been demonstrated that the concerns of Albany ”Dougherty County citizens have been fully evaluated; that the Federal Energy Regulatory Commission re Docket # PF-14-1 Sabal Trail Transmission LLC and Georgia Environmental Protection Division [Sabal Trail Transmission, LLC — Application # 22637] withhold regulatory approval of the Project; that at a bare minimum any approval be conditioned upon the compressor station being electrically powered as opposed to powered by natural gas.

I do hereby certify that this
is a true and correct copy.
[signed: Sonja Tolbert 10/30/14]
City Clerk Date
Albany. GA