Sabal Trail’s Andrea Grover tries to put Thomas County back to sleep, but local resident Alton Burns has waked it up. 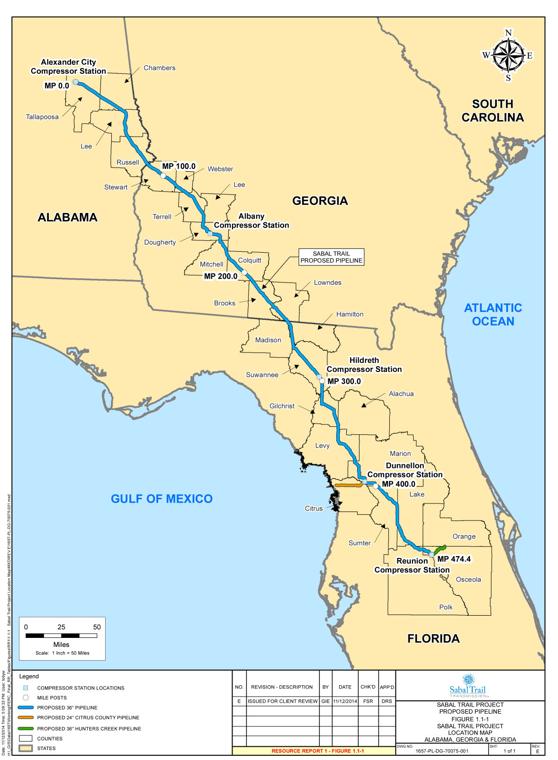 Thomas County is not on a proposed natural gas pipeline traversing expanses of Florida, Georgia and Alabama, but it is on two alternate routes.

Thomas County is not on the proposed route submitted by Sabal Trail Transmission to the Federal Energy Regulatory Commission in late November for consideration of approval.

Thomas County commissioners were not aware of the pipeline until lifelong Thomas County resident Alton Paul Burns addressed the board recently with concerns.

The earth does not belong to us, Burns told commissioners, adding that gas, oil and coal extraction are taking a toll on Mother Nature.

Noting a possible alternative pipeline route in Thomas County, Burns said, “I’m sure citizens are unaware of this and the danger.”

The story continues noting Vice Chairman Ken Hickey had not heard about Sabal Trail, and Chairman Moses Gross said the board will research the project, and:

“Nobody wants that to come through their neighborhood,” Gross said. 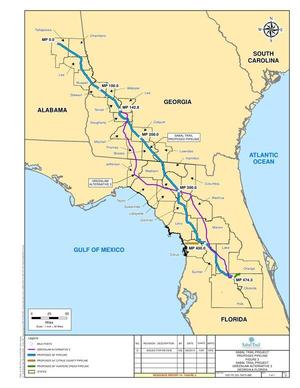 “We are not in the vicinity of Thomasville,” said Andrea Grover, Sabal Trail Transmission spokesman.

Sabal Trail is not physically in the vicinity of anybody with actual pipes yet, but what does that have to do with the issue at hand?

Grover said Sabal Trail looked at existing utility corridors and attempted to parallel the lines as much as possible.

Not according to Southern Natural Gas (SONAT), which complained to FERC about needless risk through unnecessary crossings of SONAT’s pipeline proposed by Sabal Trail.

Sabal Trail has agreed to provide two pipeline taps to the Municipal Gas Authority of Georgia.

Nevermind Colquitt County passed a resolution back in March saying it saw no benefit to Georgia of Sabal Trail’s pipeline, or that the Mayor of Moultrie, MGAG customer and county seat of Colquitt County, was heard on WCTV saying nobody asked them whether they wanted or needed the gas, and both Dougherty County and its county seat Albany passed resolutions in October wanting the pipeline out of their city, county, and state, all before Sabal Trail’s formal FERC filing in docket CP15-17 claimed that agreement with MGAG.

She didn’t mention the landowners who have told Sabal Trail their surveyors are trespassers and keep off, as reported on WCTV and in the Valdosta Daily Times.

She didn’t mention Sabal Trail is on the Dirty Dozen 2014 as one of “12 of the worst offenses to Georgia’s waters” picked by the Georgia Water Coalition, which is

a consortium of 217 conservation and environmental organizations, hunting and fishing groups, businesses, and faith-based organizations that have been working to protect Georgia’s water since 2002. Collectively, these organizations represent more than 300,000 Georgians.

But this is the one that had me rolling on the floor when I read it:

In considering the pipeline, the federal agency will look at need, while being mindful of stakeholders, the environment and ensuring proper techniques and design are in place.

“They are going to do a very stringent review of our application,” said Grover, who is based at Lake Mary, Fla., north of Orlando.

Yeah, right, stringent like FERC did of Cove Point LNG in Maryland, which they approved after massive opposition in Maryland and at FERC’s own offices, and while massive protests were going on in Albany, Georgia against Sabal Trail. Like they did of all the pipelines FERC approved except only two that FERC staff could remember FERC ever denying. Oh, yeah, stringent review!

Not part of the formal application in docket CP15-17, but for sure part of the pre-filing process and still on the table for FERC to pick if it wants to. It was Ms. Grover who first told me along with other Sabal Trail reps way back at Sabal Trail’s first Moultrie Open House a year ago that FERC could pick any of the alternate routes regardless of Sabal Trail’s preferred route.

And finally, tacked on at the end:

“ … There are many, many alternate routes.”

How about move it out of Georgia? Out of Florida and Alabama, too? Let’s do solar power instead.