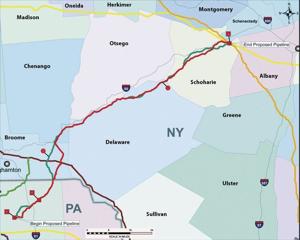 The pipeline, which received conditional approval from the Federal Energy Regulatory Commission on Dec. 2, has wasted no time in using the power of eminent domain to force people to allow the 30-inch natural gas pipeline to cross their land.

On Wednesday, Dec. 3, the pipeline’s law firm sent a letter to resistant landowners offering them a chance to accept compensation in exchange for an easement on their property. The letter gave the landowners until Dec. 11 to make up their minds.

At least 55 landowners along the route didn’t accept that offer.

As good as its word, on Dec. 12, the pipeline’s lawyer filed a eminent domain action in federal court against a landowner in the town of Middleburgh in Schoharie County.

The next week, between Dec. 15 and Dec. 19, the pipeline filed 54 more eminent domain actions against other landowners along the route, court records show.

Do you doubt Sabal Trail will do exactly the same thing? The time to stop that is now.