FERC can’t face the heat! But the rubberstamp machine can’t hide, either. It’s a safe bet protesters will be there at the new date. 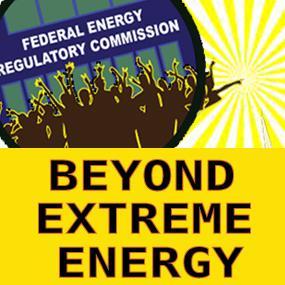 ATTENTION FERC WORLD — MAY MEETING MOVED UP TO AVOID PROTESTS: FERC has moved up its monthly May meeting at the recommendation of federal law enforcement in order to avoid planned large-scale protests. The commissioner’s regularly scheduled monthly public meeting had been slated to take place on May 21, but because of plans for protest actions involving potentially hundreds of people, FERC has moved up the meeting to next Thursday, May 14. The decision was made after a recommendation from the Federal Protective Service “to better ensure the safety of its staff and the public during the protests planned for May 21 at FERC headquarters,” FERC spokesman Craig Cano wrote in an email.

About the protests: An umbrella group called Beyond Extreme Energy that charges FERC is a “rubber stamp” for the energy industry has long planned a weeklong series of protests and other events to coincide with FERC’s May meeting. Those events begin on May 21 and last until May 29, and could include nonviolent arrests. FERC has increasingly found itself the target of climate protestors and others opposed to expanding natural gas use and exports, and has taken steps to limit disruptions at its public meetings. The commissioners argue that they have a specific, limited role granted by Congress to review proposed projects that means FERC is not an environmental regulator.

“Dishonest and deceitful,” protestors say: Lee Stewart of BXE slammed FERC’s change-of-date, saying that FERC’s statement about protecting staff is “dishonest and deceitful, and demonstrates unambiguously that they are more interested in the needs and profits of industry than in the needs of the American people,” he said in a statement. “Instead of changing its meeting dates to try to avoid protests, FERC should have the courage and integrity to end its subservience to industry, and start being concerned with the health and safety of people being victimized by fracking and gas infrastructure expansion, not make up false charges and insinuations.” He did not say whether the protest events would be rescheduled, but promised that protestors would continue to show up at FERC’s public meetings.

FERC is a rubberstamp machine. Even FERC staff could only remember two pipelines permits FERC ever denied. Not surprising when FERC brags to Congress about cost recovery, as in FERC is 100% funded by the industries it “regulates”.

It’s time for Congress to protest FERC by making FERC follow its own rules, which would result in denial of the Sabal Trail pipeline and many others. Or it’s time for Congress to abolish FERC. How about get rid of eminent domain for private companies, too. Private profit is not an excuse for a Certificate of Public Convenience and Necessity.