That’s SpectraBusters ally Gretchen Elsner of the Georgia Climate Coalition on the Friday front page of the Savannah Morning News, Clapping in the blue shirt is Tonya Bonitatibus, Savannah Riverkeeper, one of the leaders of Push Back the Pipeline. Gretchen is also about a minute or in on WJBF’s Palmetto Pipeline Project Heard In Burke County Public Meeting, by Renetta DuBose. WJBF included two pro-pipeline speakers, which gives an erroneous impression: there were maybe 5 of those, compared to all the other dozens of speakers being against. 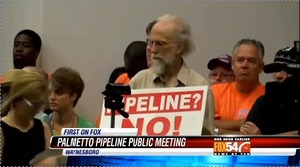 WJBF posted video of the entire meeting so you can see for yourself. I spoke for SpectraBusters, partly about the KMI proposed cross-Florida pipeline that would ship Sabal Trail fracked methane to Jacksonville, where Jaxport is gearing up for LNG export. How much easier would it be to export “petroleum products” from Jaxport, when they’re already liquid and don’t have to be pressurized? As other speakers pointed out, the growing markets for fossil fuels are overseas.

“Very few supported it. Those folks stated trucks and ships can be faulty too.”

WTOC also included the simplest summary of the issue: 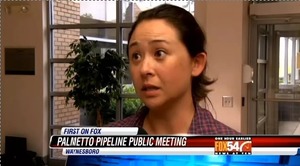 “I just don’t think their application shows how this is a public need,” said Ogeechee Riverkeeper Emily Markesteyn. “It must be a public need not Kinder Morgan’s need.”

Vice President of Kinder Morgan Allen Fore said, “The Governor didn’t indicate he’s opposed to Palmetto Pipeline project. What he wants is the eminent domain issue to be separated and addressed by the courts.”

Submit comments to GDOT before May 15.

And you can sign Push Back the Pipeline’s petition. Stop one pipeline, put a crimp in all new pipelines.

The reporters mostly didn’t want to hear about Sabal Trail because it’s outside their coverage area. But the 400 or so people in the room all heard about it, and there may be some new SpectraBusters allies.