Houston is also invading Texas with LNG export projects and their pipelines,

five of them at the mouth of the Rio Grande next to spring break resort South Padre Island. Help stop those, and help stop all LNG export boondoggles everywhere.

Anything you can do to help alert the Kingsville & Raymondville folks would be greatly appreciated. We’ve got Brownsville pretty much covered. On 04-13-2015 we had 64 at a public presentation on South Padre Island. On 04-19-2015, we had a good 100+ at a demonstration on the island. We pretty much dominated the Annova & Texas Brownsville Open Houses with 20+ demonstrators outside and a bunch of us inside. 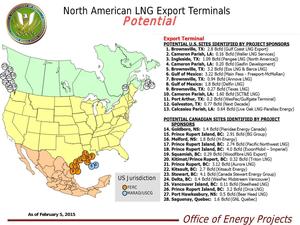 Three of those LNG export operations (Gulf Coast LNG, Annova LNG, Texas LNG) are on FERC’s map of potential LNG export projects, but the other two (Next Decade LNG and Rio Grande LNG) are not. As usual, we can’t depend on FERC to tell us what’s going on. And several of these boondoggles already submitted applications to the U.S. Department of Energy’s Office of Fossil Energy (FE); something FERC never seems to mention.

According to Rio Grande Guardian, 13 March 2015, TWO FIRMS START PROCESS FOR BUILDING LNG TERMINALS AT PORT OF BROWNSVILLE, some have pre-filed at FERC and some have not but will soon.

Last December, the Lone Star Chapter of the Sierra Club issued a 12-page report stating the LNG terminals at the Port of Brownsville could bring “industrial pollution, the risk of disaster, and habitat destruction to the Rio Grande Valley.” The report was titled “The Environmental Impacts of Liquefied Natural Gas on the Rio Grande Valley.” Since then, the group has warned that LNG facilities at the Port of Brownsville could hurt tourism on South Padre Island.

Most of these LNG operations seem to be owned by Houston-based companies, but that doesn’t make it any less of an invasion of local lands and environment.

Campirano said that a fifth project, being proposed by Next Decade LNG, is pending submittal of an application to the DOE.

DOE records show that Gulf Coast, EOS and Barca have won approval to export domestically produced LNG to Free Trade Agreement (FTA) countries. Their applications to export to non-free trade agreement countries are still under review. Annova and Texas LNG await the DOE’s approval on their respective applications. The U.S. currently has free trade agreements in force with 20 countries.

All five are yet more reasons to oppose the Trans-Pacific Partnership (TPP) and TAFTA.

Meanwhile, BEDC is also betting on SpaceX’s spaceport. BEDC’s 4 August 2015 PR, SpaceX To Build Launch Site at Boca Chica Beach, says 500 jobs are expected from SpaceX. In this space.com video hear BEDC Executive Vice President Gilberto Salinas say he expects 600 direct jobs and 400 indirect jobs. Maybe Brownsville needs to decide whether to bet on the past of LNG, which won’t produce anywhere near that many jobs, or the future of SpaceX.

SpaceX CEO Elon Musk, is also CEO of Tesla, the company that just released a home-sized battery lots of people can afford, spreading the benefits of solar power over the day into the night, plus solar is already faster, cheaper, and far safer than fracked methane. Maybe Brownsville should forget the fossil-fuel past and bet on the future of solar power which is already here now, before south Texas gets stuck with huge empty boondoggle port projects.