A RESOLUTION OPPOSING THE SABAL TRAIL
TRANSMISSION, LLC NATURAL GAS PIPELINE AS SAID
PIPELINE TRAVERSES THE CITY OF MOULTRIE,
COLQUITT COUNTY AND FOR OTHER PURPOSES 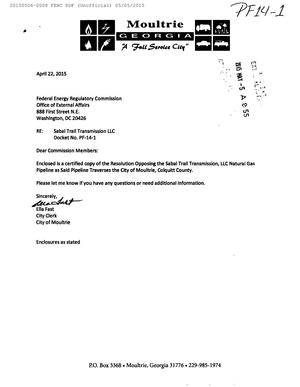 WHEREAS, Spectra Energy, headquartered in the State of Texas, and NextEra Energy, Inc., headquartered in the State of Florida, (Together ‘Sabal’) have proposed developing a 460 mile natural gas pipeline originating in Alabama and terminating in Florida in order to provide for the power generation needs of Florida Power and Light and Duke Energy of Florida, a portion of which will traverse through the City of Moultrie, Colquitt County, Georgia; and,

WHEREAS, Sabal was granted approval by the Federal Energy Regulatory Commission (“FERC”) to utilize FERC’s Pre-Filing Environmental Review Process for the proposed SABAL TRAIL TRANSMISSION, LLC being assigned Docket No. PF14-1; and,

WHEREAS, this project is typically referred to as SABAL TRAIL PROJECT (hereinafter “Project”); and,

WHEREAS, the members of the Moultrie City Council have been listening and responding to concerns expressed by Moultrie landowners and citizens affected by the Project; and,

WHEREAS, in order to better understand the concerns of its citizens and the Project, members of the Moultrie City Council have reviewed publically available information, including Public Information Meetings wherein the general public heard from Sabal Trail representatives, community representatives, FERC representatives, and various state departments and elected office holders; and,

WHEREAS, the City of Moultrie is concerned about the personal property rights of citizens along with the limited use of right-of-ways, while maintaining the responsibility for taxes and liability where the project is proposed to be located

WHEREAS, based upon all of the information disseminated, Mayor and Council have become increasing concerned a that the health and welfare of the community will be compromised by the construction of the pipeline within Moultrie’s corporate limits; and.

WHEREAS, it is clear to the City that Sabal has merely sought the shortest and most cost effective route for the pipeline as opposed to taking into consideration the concerns set forth in this Resolution; and,

WHEREAS, alter careful consideration, it is in the best interest of the City and its citizens that at the present time the by the Mayor and Council of the City of Moultrie signify their opposition to such project; and, 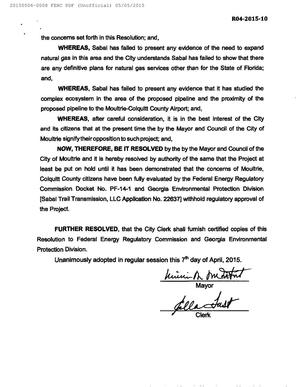 NOW, THEREFORE, BE IT RESOLVED by the by the Mayor and Council of the City of Mouttrie and it is hereby resolved by authority of the same that the Project at least be put on hold until it has been demonstrated that the concerns of Moultrie, Colquitt County citizens have been fully evaluated by the Federal Energy Regulatory Commission Docket No. PF-14-1 and Georgia Environmental Protection Division [Sabal Trail Transmission. LLC Application No. 22637] withhold regulatory approval of the Project.

FURTHER RESOLVED, that the City Clerk shall furnish certified copies of this Resolution to Federal Energy Regulatory Commission and Georgia Environmental Protection Division.

Unanimously adopted in regular session this 7th day of April, 2015. 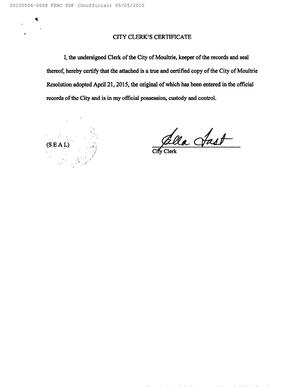