Locals are concerned about the health of mankind, of everybody, and call on our elected and appointed officials to stop the Sabal Trail fracked methane invasion. 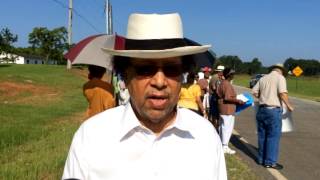 I haven’t heard too much from the elected officials in Terrell County as concerned. As a matter of fact, I haven’t heard from our state representative. Even our Senator who represents this area, on the health of the citizens that live in this area.

I understand that the generator station that’s going to be placed here is going to be very noisy. And also if this thing could leak into the aquifer, it could contaminate the water system.

So we’re concerned about the health of mankind, of everybody.

Actually, Rep. Gerald Greene, District 151, did write a letter to FERC back in November 2014, but he just said he was concerned, he didn’t do what U.S. Congressman Sanford Bishop, GA-02, did, in saying:

The Terrell County Commission did pass a resolution in November 2014 saying:

Thus, we are in opposition to the construction of the proposed pipeline in Terrell County and request the Federal Energy Regulatory Commission (FERC) give serious consideration and analysis to alternate routes that avoid the impact to Terrell County, Georgia including those that affect wildlife habitat, forests, wetlands, streams and creeks and that do not compromise socioeconomic cultural issues.

That’s a good start, but where are all the rest of our local, state, and national elected officials? And once again it’s time for concrete action.

Remember to comment to FERC about Sabal Trail and that Albany compressor station.

And remember to sign the Petition to Georgia Governor Nathan Deal: Oppose Sabal Trail like you oppose the Palmetto Pipeline.

Then ask your elected and appointed officials to act.

And see next post for more things local, state, and national elected officials can do.