No new pipelines, fracking, or LNG export. Solar, wind, and water power now, say health professionals from all over the U.S. 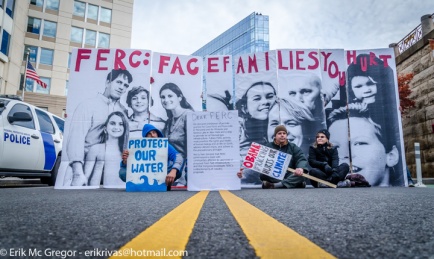 Washington, DC — In an open letter to the Federal Energy Regulatory Commission (FERC), more than eighty health professionals urge the FERC to stop permitting oil and gas infrastructure and to move to clean sustainable sources of energy to protect the health of people and the planet. The construction of oil and gas projects such as unconventional fracking, pipelines, compressor stations and export terminals which pollute with cancer and disease-causing chemicals is akin to an uncontrolled health experiment that is destroying communities and risking lives of residents. These projects also harm the workers who build and maintain them. For the health of all who are involved, health professionals demand that this unethical ‘experiment’ stop.

All that and pipelines risk the Floridan Aquifer which is the source of our drinking water in Florida and south Georgia.

The FERC is independent of taxpayer dollars, but is dependant on the oil and gas industries for its funding, the very industries the FERC is supposed to regulate.

As a result of this fundamental conflict of interest, the FERC is a rubber stamp agency for new permits regardless of the danger they pose to the health and safety of communities and the future livability of the planet. A case in point is the new Liquefied Natural Gas (“natural” is an industry marketing term, the gas is more accurately called “fracked gas”) refinery and export plant being built in Southern Maryland by Dominion Resources. This huge plant will store 14.6 billion cubic feet of liquefied gas for export by tankers to Japan and India.

There is no excuse for new fossil fuel pipelines, fracking, or LNG export.

The sun is already rising.

BXE will be fasting in front of FERC:

Members of Beyond Extreme Energy have tried to work within FERC’s tightly-controlled system without success. They used protest to call attention to the direct impact FERC-approved projects are having on their livelihoods and communities, but the FERC continues to close its eyes and ears to them. Now BXE members are taking a bigger step and will be fasting on FERC’s doorstep for three weeks beginning September 8 to demand no new permits.

You can do what you can where you are.

For example, call Georgia Governor Nathan Deal’s office at (404) 656-1776 and ask him to oppose Sabal Trail’s fracked methane pipeline like he opposes KMI’s Palmetto petroleum products pipeline, and for the same reasons: no benefit to Georgia, only destruction and hazards.

And there will be another public comment period and a public hearing in Albany, GA by GA-EPD about that proposed compressor station.

And FLoridians for Solar Choice is backing a bill already in the Florida legislature to facilitate solar financing, much like the law Georgia passed this year. Georgia is now the fastest-growing U.S. solar market. The Sunshine State can turn to the sun even faster.

The sun is already rising.