Sabal Trail targets those most vulnerable, the “elderly, disabled and without monetary or political means to “fight” such an environmentally intrusive plan.”

As State Senator for District 12 in the State of Georgia, I write this letter in opposition to the proposed Sabal Pipeline location in the populous area of Dougherty County / Albany, Georgia. The Sabal Pipeline proposed location is a “reckless” proposal that negates the health and safety of current and future residents of Dougherty County / Albany, Georgia. Many of the residents in this part of the United States of America live below the poverty line. When these kinds of negative environmental proposals are made, the residents, again, feel abandoned and marginalized by a government that was elected to protect “the least among us”! Officials that are charged with these decisions are also viewed as insensitive and empowered to place these kinds of projects in neighborhoods that have long since been written off as non-essential “collateral damage”!

Other reasons for my opposition to the Sabal Pipeline are:

For additional conversation on this proposed issue, I can be reached by cell phone at 229-347-0251. Consideration ofthe health and safety of the people of Dougherty County/Albany, Georgia is the nexus of this communication.

You can help stop Sabal Trail:

You can pick one or more of the above and help stop this un-needed, destructive, and hazardous fracked methane boondoggle! 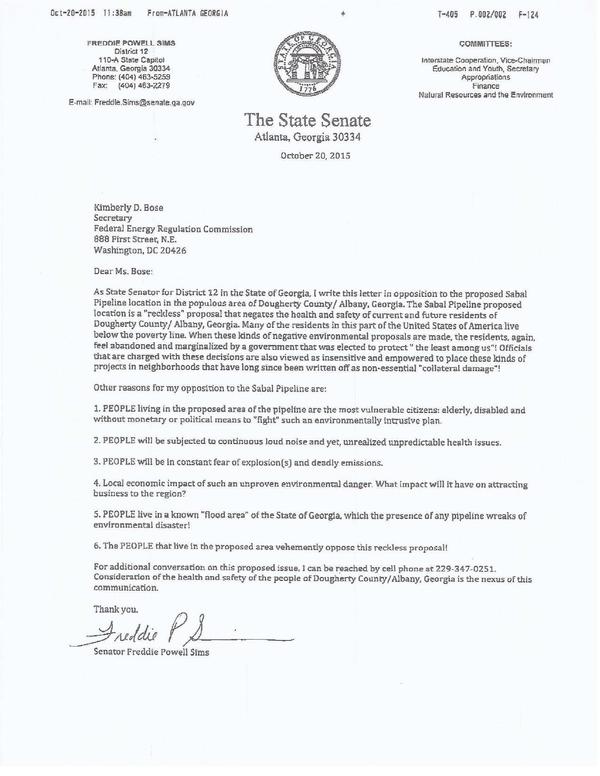