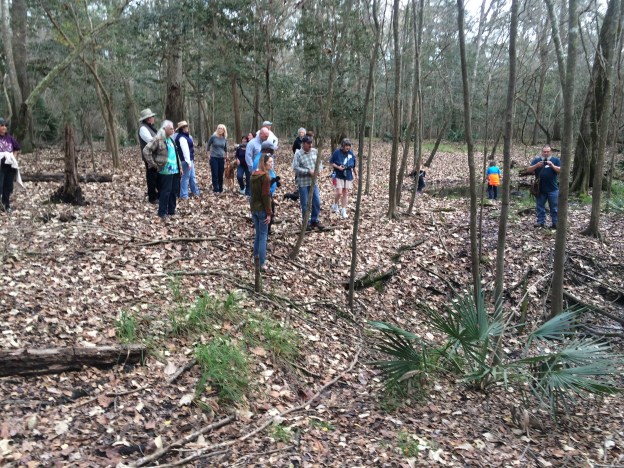 The event was held at Suwannee River State Park where Sabal Trail plans to bore a pipeline under the River beginning 675 yards off the river bank. This event included a hike of the Sabal Trail pipeline route.

After hiking the pipeline route, Commissioner Clyde Fleming became very concerned as he saw the sinkholes in and all around the route. He stated “Sabal Trail has lied to us” and expressed concerns about the integrity of ANY of the environmental studies Suwannee county has received from them.

Due to the efforts of Commissioners Fleming and Sessions, last night the SBOCC reluctantly agreed (without a vote) to visit the Sabal Trail pipeline’s proposed boring site under the Suwannee River at the Suwannee River State Park sometime in mid-February.

Despite objections by Commissioner Wainwright, who stated that he has already walked the route and says he is doing his own research.

The SBOCC voted to remain neutral on the Sabal Trail pipeline at their last meeting — vote 3-2 — with Fleming and Sessions voting nay.

Suwannee County citizens are very grateful to have at least two Commissioners that are willing to represent their constituents. Bless you both Clyde Fleming and Larry Sessions.