The Palmetto Pipeline project was initially given the green light by Kinder Morgan in late 2014. It was designed to transport 167,000 barrels per day of refined petroleum products from the Gulf Coast to markets in the Southeast. However, its pathway, which will take it through 201 miles of eastern and coastal Georgia, has drawn opposition from local residents and environmental groups in that state. 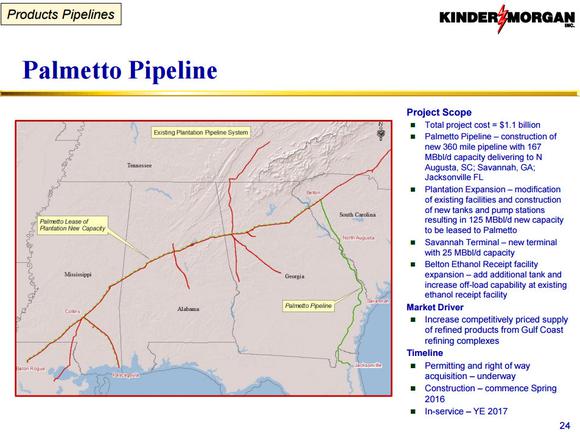 Because of that opposition, the General Assembly of the state of Georgia recently passed a temporary moratorium on the use of eminent domain for pipeline construction while it commissions a study to review the project. That effectively knocks the project out of service for at least the next year because it needed to use eminent domain to lock up some of the land for that pipeline’s proposed route.

This isn’t the first time the company has had issues with getting one of its pipelines built. It is currently facing intense opposition in Canada to expand its Trans Mountain pipeline. Furthermore, it’s not the only pipeline company to face opposition, with Canadian rival TransCanada (NYSE:TRP) the poster child for pipeline problems. TransCanada spent six years trying to build the southward-bound Keystone XL pipeline before the project was ultimately rejected. When that project was delayed, it turned its attention to building an eastward-bound pipeline in Canada, only to face opposition in that direction as well. That opposition is a big reason why TransCanada is trying to buy growth, because it’s having such a hard time building it.

The Motley Fool article repeatedly emphasizes that the moratorium on petroleum products pipelines passed by the Georgia legislature is temporary. That much is true, so Palmetto still needs further defeating.

Pressing pause on the Palmetto Pipeline project is actually a good thing for Kinder Morgan. Not only do the returns not appear to be as compelling as some of its other recent projects, but it now won’t have to spend this capital right away. That gives it some extra financial flexibility at a time when it’s at a premium.

Yeah, but KMI is facing similar opposition pretty much everywhere. Including Georgia, where nobody is fooled.

Kinder Morgan has not said how long the suspension of the project will last. John Berret, a landowner along the project’s proposed path, says while he’s happy the pipeline has been suspended, he’ll keep an eye out for it in the future. Berret says, “We’ll be constantly looking for it. We need to go ahead and put the nail in the coffin and get legislation through to protect the land owners in our area.”

There’s a poll in this article. Maybe you’d like to vote.

Given Kinder Morgan’s focus on capex over dividends, losing out on an attractive growth project like the Palmetto Pipeline is a negative. This was the largest project in the products pipelines segment backlog. With the $5.4 billion Trans Mountain pipeline expansion also facing stiff opposition, a full 35% of Kinder Morgan’s $18.2 billion 5-year capex backlog is under pressure.

The project has faced stiff opposition in Berkshire County because the Massachusetts Loop would cut through the Otis State Forest, which is owned by the state’s Department of Conservation and Recreation (DCR). Plans call for the withdrawal of one million gallons of water from an isolated pond in the forest, which would be used to test the pipeline. Construction is expected to impact approximately 29 acres of the forest.

Major opponents have included Massachusetts Sen. Ben Downing (D-Pittsfield) and Rep. William “Smitty” Pignatelli (D-Lenox) who represent the area in Berkshire County, as well as environmental and landowner groups such as Mass. Audubon and Sandisfield Taxpayers Opposed to the Pipeline (STOP).

The Massachusetts Constitution, in

Article 97 states that any taking of state conservation land requires a two-thirds vote of the state Legislature. Last year a representative from eastern Massachusetts introduced a bill to convey such an easement to the pipeline company, after legislators from western Massachusetts refused to do so. A vote on the bill, heard during a packed public hearing at the State House in November, has not been scheduled.

Most of the 3,800-acre state forest, with its 400-year-old hemlocks and 62-acre Lower Spectacle Pond, was preserved in 2007 in a collaboration between the state and Mass Audubon at a cost of $5.2 million, one of the biggest conservation land deals in Massachusetts history.

While FERC says it encourages pipeline applicants to cooperate with state and local agencies, the commission asserts its right under federal law to site interstate natural gas pipelines and preempt any conflicting state laws, saying state agencies may not “use their regulatory requirements to undermine the force and effect of a certificate issued by the Commission.”

The March 11 certificate says FERC will not act as a “referee,” and that “in the event compliance with a state or local condition conflicts with a Commission certificate, parties are free to bring the matter before a Federal court for resolution.” 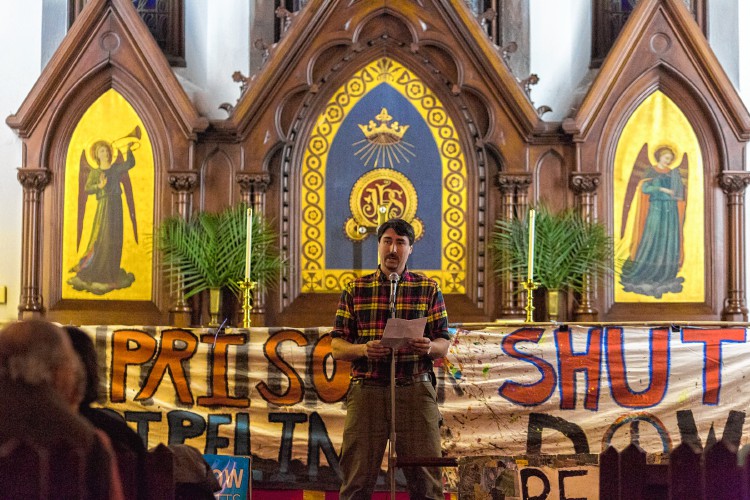 “I believe we’re all on the route, basically,” said Shira Lynn of Williamstown. “You don’t have to be on the route to understand the importance of this,” Kaye said.

Bob Marshal of Chicopee was another marcher off the direct route but still involved.

“I think we need to get right on the matter at hand … start producing solar energy as fast as we can and put a lot of people to work,” Marshal said. He was impressed with the scenery and the people along the route.

And it’s even worse than that. KMI’s stock price has fallen more than 50% in the past year, and Moody’s, 28 March 2016, Moody’s downgrades Midcontinent Express Pipeline to Ba2; negative outlook,

“The downgrade reflects Midcontinent Express Pipeline’s significant counterparty risk due to its contractual exposure to Chesapeake Energy Corporation (Caa2 negative), which may lead to lost revenue,” said Terry Marshall. “In addition most of MEP’s existing contracts roll off in 2019. Based on current market conditions we expect contracts to be renegotiated at substantially lower rates, which could result in higher leverage”.

So KMI is facing opposition to its Trans Mountain pipeline, its Connecticut Expansion pipeline, its Tennessee Gas Pipeline Co. Northeast Energy Direct project, and of course to its Palmetto project. The bigger they are, the harder they fall.

Meanwhile, the Palmetto project is for petroleum products, not natural gas, and so FERC doesn’t have the main permitting authority. The real solution in Georgia is a permanent ban on eminent domain for private pipelne companies, and that could come out of the moratorium bill.

“Kinder Morgan … should do the right thing and announce that it is outright canceling this unnecessary project rather than simply suspending it,” said Steve Caley, legal director for GreenLaw.

“It’s awesome,” she said. “It’s what we need. It’s what the community needs. It’s a clear story of what happens when the community comes together. These groups came together and very clearly spoke as one. We hope to be able to ride that wave.”

Ryan Chandler, vice president of business development at Colonial Group, is still eager to see Georgia’s laws on these issues clarified. The moratorium bill includes a provision for a 13-member commission to recommend changes to the way the state evaluates pipelines.

“This project exposed gaps in the existing regulations related to petroleum pipelines in Georgia,” he said. “I think the work of the study commission remains incredibly important to the state.”

Georgia’s moratorium bill, which Gov. Nathan Deal has until May 3 to sign, would create a citizens’ commission to study the state’s existing laws and regulatory procedures and make recommendations for improvements.

A similar bill has passed in the South Carolina House of Representatives and is awaiting action in the Senate.

Five yeas ago, big coal seemed invincible, too, and now do you see any new coal plants being built? Instead we read on Nasdaq about Bankruptcies Starting To Pile Up In Coal Industry, by James Stafford of Oilprice.com.

The rest of the fossil fuel industry is going down, too.

This is the biggest reason:

All of U.S. electricity usage is down there at the bottom right. Everything else is the States’ renewable potential.

By 2023, when most U.S. electric grid power comes from solar energy, nobody will be stupid enough to waste money on new pipelines.

Our task is to stop the pipelines some financiers are still stupid enough to back now.