Monday, a federal judge in Columbus will weigh whether another Texas pipeline company can invoke eminent domain to immediately gain control of 27 properties in southwest Georgia for a pipe delivering natural gas to Florida. The Sabal Trail Pipeline would cross 157 miles and nine Georgia counties — as well as plantations near Albany owned by Ted Turner and former Florida U.S. Sen. Bob Graham — without any assurance that gas would end up in Georgia.

“The pipelines are very, very similar because they were threatened with eminent domain the same way,” said Sandra Jones, 71, whose house and farm near Moultrie are targeted by the pipeline builder. “It’s really horrible because this is my home, my father’s home, my granddaddy’s home and my great-granddaddy’s home, and (the pipeline) would destroy our farm. I feel like I’m letting them down.” 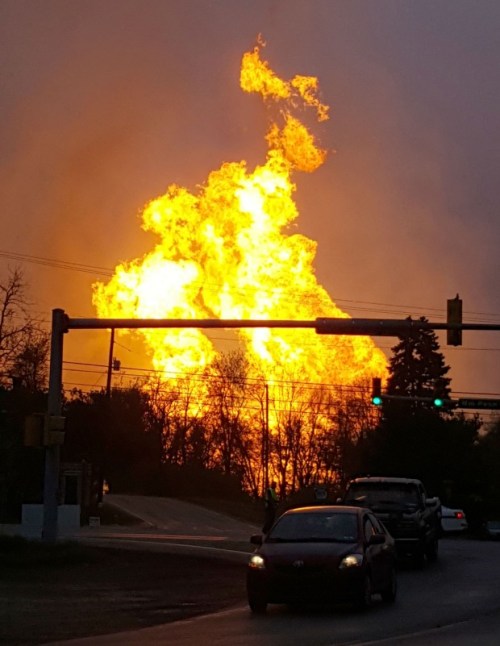 exploded Friday in Pennsylvania, sending one man to the hospital and charring acres of tall trees. The timing, for Sabal Trail, couldn’t have been worse.

“A similar explosion would take us out. We would be ash,” said Jones, whose home lies within 100 feet of the pipe’s proposed route.

In a statement Friday, Spectra Energy, the parent company, said, “Our first concern is for the safety of the community and our employees.”

Oh, really? So why did Spectra, before even determining the cause of the Pennsylvania explosion, declare force majeure so it wouldn’t have to pay penalties for rerouting gas deliveries all over the eastern U.S.,

including to Little Rock, Arkansas, where the same Spectra Texas Eastern pipeline blew up under the Arkansas River in Little Rock a year ago? That sure looks like money is Spectra’s first concern.

The article mentions the historic 128 nay to 34 aye rejection of easements for Sabal Trail, which wants to drill under the Chattahoochee, Flint, and Withlacoochee Rivers and other rivers and streams in Georgia (plus in Florida the Suwannee, Santa Fe, and the other Withlacoochee River).

The Houston-based company, though, is undeterred and expects construction to begin by June 21 to meet a May 2017 in-service deadline.

Well, they have to act undeterred! If they miss that May 2017 in-service date, according to the RFP they won from FPL, they had to put up a $200 million bond and Sabal Trail may forfeit that and the contract if they miss that date. We won’t have to wait until then to find out, either: there are many milestones before that.

The article discusses the permits Sabal Trail already has and the, ah, contributions it’s made to various schools and such, which are standard operating practice for pipeline companies.

Then this other standard practice, of claiming some random percentage without any list of landowners to substantiate it:

Sabal Trail has purchased easements to run underground pipes from 89 percent of the 1,600 property owners in the three states. It still needs to cut deals with 233 landowners — the bulk in Florida — or else get a judge’s permission to condemn their property.

“The pipeline will benefit the Southeast region by making available additional supplies and new energy infrastructure to support the growing demand for clean-burning natural gas,” Grover said. “Sabal Trail will increase energy diversity, security and reliability to these Southeast markets.”

There is no such demand, except from utility companies with guaranteed profits from captive state public service commissions. Meanwhile, Georgia Power and Southern Company for a year now have been actively promoting solar power and Georgia is the fastest-growing U.S. solar market. As Sierra Club pointed out two years ago, Florida already gets 60% of its electricity from natural gas. Adding a third pipeline decreases energy diversity. For real energy diversity, security, and reliability, Florida needs to cancel this $3 billion boondoggle and get on with solar power for the Sunshine State.

There’s much more in the article, which is among the best I’ve seen.

Including the article’s main subject:

Opposition to the pipeline goes well beyond a visceral aversion to an industrial, and potentially explosive, project in peoples’ backyards. In addition to running underneath the rivers, it would cross three state parks and thousands of acres of environmentally sensitive wetlands.

Much of the ground below southwest Georgia is limestone that allows water to flow easily between streams and springs. Leaks, critics fear, could send gas into the water supply. Pipeline construction could create sinkholes that drain streams or puncture subterranean waterways. And, with abundant sunshine, Florida can produce plenty of renewable energy without extracting and transporting fossil fuels, opponents say. Albany and Valdosta, as well as Dougherty and Lowndes counties, have passed resolutions opposing the pipeline.

Monday, in Columbus, Sabal Trail will ask a federal judge to allow condemnation for pipeline rights-of-way on 27 Georgia properties, including a 9,000-acre plantation owned by Turner and a 7,300-acre plantation owned by Graham. Turner’s attorney declined to comment. Graham’s attorney, Ed Hallman of Marietta, said his client’s “biggest problem” is that the deal offered by Sabal Trail would let it run the pipeline anywhere on a 3,000-acre tract of Graham’s cattle and quail-hunting farm.

Steve Caley, an attorney with GreenLaw in Atlanta who’s representing property owners and environmental groups, said it makes no legal sense to give Sabal Trail the ability to condemn property when it doesn’t have the state permit needed to dig under the rivers.

“Sabal Trail is not producing any benefit to the citizens of Georgia, and that’s no different than what the Palmetto Pipeline (tried) to do in east Georgia,” Caley said. “They’re both private companies taking peoples’ property for private profit. And it’s particularly repugnant when all the natural gas will be used in Florida.”

Except for the gas that would be exported through four or five different liquid natural gas (LNG) export operations already approved in Florida right where this pipeline chain would go. Which would run up the cost of domestic natural gas.

Georgia is the fastest-growing U.S. solar market. Florida should be. Stop this $3 billion Sabal Trail boondoggle and help the sun rise on Florida, Georgia, and the world!