FERC’s role for oil pipelines is different than for natural gas pipelines. FERC doesn’t actively promote petroleum products pipelines through federal eminent domain like it does for fracked methane; instead it leaves oil pipeline eminent domain to the states, which for Georgia seems to mostly mean the Georgia Department of Transportation (GDOT).

The Commission’s responsibilities include:

So Kinder Morgan’s Palmetto petroleum products Project does fall under FERC, but not the same way as for Sabal Trail’s fracked methane pipeline.

If you guessed the taxpayers, as I did, nope. On FERC’s own About FERC web page:

The Commission is funded through costs recovered by the fees and annual charges from the industries it regulates.

To make it even richer, the sentence before that reads:

There is no review of FERC decisions by the President or Congress, maintaining FERC’s independence as a regulatory agency, and providing for fair and unbiased decisions.

But FERC’s web page says nothing about FERC’s independence from the industries it regulates.

Regulatory capture happens when a regulatory agency, formed to act in the public’s interest, eventually acts in ways that benefit the industry it is supposed to be regulating, rather than the public.

Its name is the Federal Energy Regulatory Commission, but lately it’s been sounding more like a marketing firm for pipeline companies. You can help fix that. 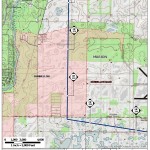 About 50 people attended an open house meeting held by Sabal Trail Transmission LLC, the energy firm that will construct the roughly 465-mile line for two of America’s biggest energy companies. The line will go through Alachua and Marion counties, among others….

John Peconom, project manager for the Federal Energy Regulatory Commission, which will have final approval over the pipeline, described Sabal Trails efforts at this point as “shaking the bushes.”

The company, he said, is attempting to identify — and mitigate, if necessary — as many issues as possible before filing its application with the government, which should come in about a year.

Peconom told me in Moultrie, GA 27 January 2014 that that last was FERC’s role. I wonder why END_OF_DOCUMENT_TOKEN_TO_BE_REPLACED