“Why would you try to keep natural gas prices down to favor other industries?”

The Orlando Sentinel story includes the usual excuses from pipeline proponents. And also this:

But controversy persists nationally over water pollution caused when drillers use “fracking” to extract natural gas from the ground.

Those concerns and others specific to the pipeline’s potential impacts to private property in Alabama, Georgia and Florida are being raised by a group called SpectraBusters, which is using http://www.spectrabusters.org to organize its efforts.

The longest leg of the line is proposed to carry 1 billion cubic feet of gas daily and extend 474 miles from Alabama to just south of Orlando in Osceola County. Osceola gets not one but three pipelines if FPL and Spectra have their way: 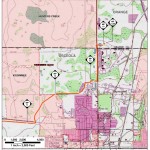 At the end of the Sabal Trail portion would be a 14-mile spur called the Hunters Creek Line that leads to southwest Orange County and connects with the Florida Gas Transmission Co. LLC pipeline, the longest and largest gas-line system in the state.

Also connected to the end of the Sabal Trail line would be a 126-mile segment, carrying 400 million cubic feet of gas daily to FPL’s power plants near Lake Okeechobee. Called the Florida Southeast Connection, that project is being pursued by NextEra Energy only and would cross largely rural areas in five counties.

According to FERC’s John Peconom in Moultrie last month, the scoping meetings could be as early as March 2014.

The agency has received dozens of comments already from residents and groups in Georgia and Florida opposed to the project. 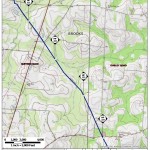 You can subscribe to those comments on FERC’s e-comment system, and you can submit your own: use docket number PF14-1. Many of those comments are also appearing here on http://www.spectrabusters.org as time permits, including Farmer and lower income folks are people —James & Tracy Ryder to FERC.

12 thoughts on “Even many FPL allies oppose new methane pipelines”