Sabal Trail did all that was strictly required by FERC, so quit your whining, basically. The only new information is the list of newspapers STT used for advertising. People didn’t quit complaining, so later STT added a makeup meeting in Moultrie.

On October 16, 2013, the Director of the Office of Energy Projects issued a letter in the above-referenced docket approving the request of Sabal Trail Transmission, LLC (“Sabal Trail”) to commence the Federal Energy Regulatory Commission’s (“Commission”) Pre-Filing Review Process for its proposed Sabal Trail Project (“Project”). Pursuant to Section 157.21(f)(1) of the Commission’s regulations,1 Sabal Trail filed on October 23, 2013 the established dates and locations for eighteen open houses for its proposed Sabal Trail Project. On November 12, 2013, Sabal Trail filed the date and location for an additional open house.

As part of its commitment to provide affected landowners, interested stakeholders (including agencies), and Commission Staff with multiple opportunities to receive timely information on the open house meetings, Sabal Trail has an established communication plan that includes sending an open house announcement letter directly to each affected landowner and advertising the dates and locations of the open house meetings in local newspapers within 7-10 days prior to the scheduled open house. Additionally, the dates and locations of Sabal Trail’s open houses can be found on the events page of the Sabal Trail website at www.sabaltrail.com.

2 Sabal Trail notes that the dates and locations provided in Attachment A have not changed from the information provided in Sabal Trail’s October 23, 2013 and November 12, 2013 submissions.

Sabal Trail will provide a courtesy copy of this response directly to the individuals who filed comments related to the open house dates and locations, and newspaper advertisements.

And only their parent companies Spectra Energy and NextEra have substantial assets beyond what they need to install this one pipeline. So what happens if it blows up? What stops the shell companies from going bankrupt like “Freedom Industries” did in West Virginia after polluting the water supply for 300,000 people?

Since that list hasn’t changed, and it’s already posted, let’s not repeat it again here. The second appendix contains the only new information in this Sabal Trail letter. 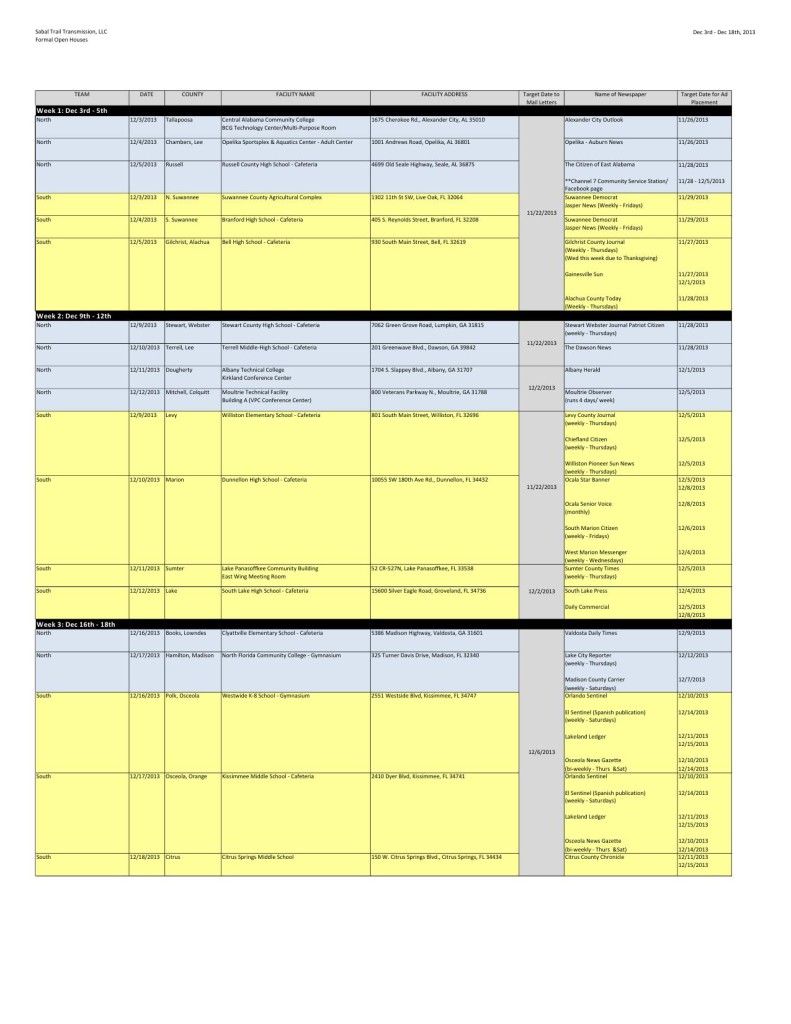