Two of the most organized Riverkeepers in Georgia, plus the Georgia Sierra Club and a group of landowners in Dougherty County, Georgia, have retained environmental law firm Greenlaw to address the Sabal Trail Pipeline. The task is difficult because of lack of information from Sabal Trail and from FERC. Here Steve Caley of Greenlaw spells out what his clients have asked for and how it’s been refused. You can help by also asking FERC or your elected officials to ask FERC to provide the missing information and to extend the Scoping Period. The PDF of the letter includes the attached documents. -jsq

On behalf of the Kiokee-Flint Group, the

Flint Riverkeeper, the Georgia chapter of the Sierra Club and the Chattahoochee Riverkeeper, I am writing to request your assistance in obtaining critical information from Sabal Trail Transmission, LLC (“Sabal”) in the above docketed matter. The information further described below is necessary in order for us to adequately submit our comments with respect to FERC’s pre-filing environmental review.

I am also requesting that FERC extend the deadline for submitting comments as part of the scoping process to 30 days from the date Sabal provides the requested information.

On February 18, 2014, FERC issued its Notice of Intent to Prepare an Environmental Impact Statement for the Planned Southeast Market Pipelines Project and Request for Comments on Environmental Issues.

In that Notice, FERC established that the scoping period for submitting comments relating to FERC’s environmental review would expire on April 20, 2014. As further discussed below, despite assurances from both Sabal and FERC representatives, Sabal has refused to provide information vital to our ability to make meaningful scoping comments, particularly with respect to alternative pipeline routes.

Despite Sabal’s repeated assurances regarding its commitment to transparency and sharing information related to its proposal to construct a 460 mile long natural gas pipeline through three states (Alabama, Georgia, and Florida), it repeatedly has refused to provide all but the most basic information regarding its pipeline proposal. I will not catalogue the numerous instances of Sabal’s stonewalling at this time but will focus on Sabal’s latest refusal to provide information related to its preferred pipeline route and alternative routes that it has considered and rejected. 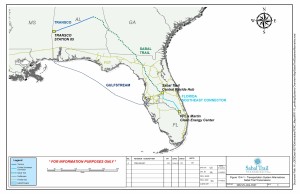 As you know, as part of FERC’s environmental review and the scoping process, Sabal must describe and FERC must consider both Sabal’s preferred route and alternative routes. See 18 C.F.R. § 380.15. Furthermore, “[t]he siting, construction, and maintenance of facilities shall be undertaken in a way that avoids or minimizes effects on scenic, historic, wildlife, and recreational values.” Id. In its Draft Resource Report 10, Sabal notes that it has complied with this directive in presenting its preferred route and in dismissing certain alternative routes. See Report 10 at pp. 10-7 to 10-12. Sabal further notes that its evaluation utilized field reconnaissance, aerial photography, USGS topographic maps, National Wetland Inventory (“NWI”) maps, Google Earth, Geographic Information Systems (“GIS”) databases from county, state, and federal sources, and state, natural resource, and land use data layers. Id. at pp. 10-8 to 10-9. Therefore, Sabal has this information in its possession.

We intend to submit comments to FERC as part of the scoping process. We particularly intend to submit comments related to Sabal’s preferred route as well as potential alternative routes. In order to assist us with making meaningful comments as part of the scoping process, on March 13, 2014, I wrote John Peconom, FERC’s Environmental Project Manager for this project, and timely requested Sabal’s documentation of field reconnaissance, aerial photography, USGS topographic maps, NWI maps, GIS data, and land use data layers which Sabal has compiled and considered as described in its Draft Resource Report 10. On March 21, Mr. Peconom responded by stating that FERC did not have this information and therefore would request it from Sabal. (Copy of e-mail correspondence with Mr. Peconom is attached).

After hearing nothing further from Mr. Peconom, on April 1, I wrote Sabal and requested this information again, and more specifically, requested the following information:

Consistent with its practice of obfuscation and lack of transparency, on April 4, Sabal denied our request for the above information. See attached letter from Lisa Connolly, Sabal’s General Manager Rates and Certificates. In her letter, Ms. Connolly has the audacity to proclaim that our request for critical information related to Sabal’s consideration of pipeline routes is “premature.” Contrary to Ms. Connolly’s assertion, what is “premature” is setting a scoping comment deadline – April 20 – that expires before critical information regarding the heart of the scoping process – alternative routes – is provided. It is extremely difficult to adequately evaluate pipeline routing over long distances and the environmental factors affecting that routing in the absence of the very information that Sabal itself has used. The fact that pipeline routing may be examined on hardcopy photographs and generalized maps does nothing to allow technical evaluation of massive quantities of routing and land use-related data in a modern-world technical way, i.e. through GIS portrayal and analysis.

The facts are simple – Sabal has the requested GIS data and it generated and used the data to produce its maps, yet now at a critical juncture in the process it refuses to share it. Only two possible reasons may explain this refusal: Sabal has something to hide or it wants to make it as difficult as possible for the affected public to evaluate the routes Sabal has considered. Neither reason is legitimate.

Sabal is fully aware that we intend to provide one or more alternative pipeline routes. Since our intent is to propose alternate routes that will significantly reduce the disturbance and taking of lands, it would be most useful to have exacting geo-referenced GIS data that we could simply and quickly input into our GIS database to facilitate review of both Sabal’s proposed pipeline routing and the development of alternate options that should be considered during the EIS process. Considering the magnitude and length of the pipeline route we are examining, Sabal well knows that refusing the requested information will slow down our review.

We appreciate your consideration and look forward to hearing from you as soon as possible as time is of the essence.